Georgia Tech By The Numbers

Share All sharing options for: Georgia Tech By The Numbers

This is coming a little later than I had anticipated because apparently I have a real full-time job that does not involve orange and blue (despite my best attempts otherwise). But in any event, I have some thoughts about this week's matchup, and what better way to share them than good ol By The Numbers?

One thousand nine hundred and ninety. Or, as perhaps you've seen elsewhere, 1990. That's the year the Yellow Jackets last notched one in the W column in cozy Charlottesville. I don't actually want to talk about this much, because that is, if you'll recall, when they beat the then-undefeated, No. 1 ranked Virginia squad, on their way to their national title. I am tearing up just writing about it, so let's move on.

Six and one. 6-1? Well if you've been paying any attention, you might say that this is Georgia Tech's record going into Saturday's rumble. You would be mistaken -- that's not exactly what I'm referring to here. Rather, I am referring to this point last year. That's right. Last year, heading into the UVA-GT game, the Ramblin' Wreck was again 6-1. Two wins, a loss, and four straight wins. Exactly the same way they got their 6-1 this year. They were nationally ranked then. They are nationally ranked now. The similarities are uncanny...

Three and three. Again, you might say that 3-3 is our current record. Again, you'd only be partially correct. What I'm referring to here is, again, our record last season (against FBS teams) going into this matchup. Okay, really it was 4-3 (the extra win came against FCS Richmond), but this little exercise was necessary to show my point of the striking similarities between last year and this. One glaring difference is that last year, they were two-touchdown favorites at home. This year, the opening line was just 4 points in their favor. How do you like them odds?

Second. Unfortunately, GT has no issues with taking it to the ground, as they have the

Four. That is the average number of sacks we allow per game. Four. I believe (but as I am getting somewhat close to the end of this, I am too lazy to research) that this all comes with Sewell being under center. I don't know what he did to piss his O-line off, but I hope they've kissed and made up this week, because right now, we rank 118th in the country in this category. There are only 120 FBS teams, folks.

At the risk of sounding like Captain Obvious, the key to this game will be whether Virginia's offense can take advantage of open opportunities. Georgia Tech might be a high-scoring crew, but their defense is somewhat lacking, and opponents seem to have no troubles racking up the points, as they are giving up an average of 26 a game. I have faith the Virginia's defense, a unit that gets it done week in, week out, without attracting too much attention to themselves, will be able to contain Georgia Tech's triple option when they need to. I hope Sewell (if healthy), Verica and company will able to show us that they have enough fight in them to bring us to the post-season.

There's no doubt that this is a big game for both teams. Georgia Tech controls its own destiny at this point and can make it to the ACC title game if it wants. They have an 8-game Charlottesville losing streak to break, and they're building off some incredible momentum from last week. Virginia needs to prove that the last three games, albeit against weaker opponents, were not flukes, and that the team deserves its place on top of the dominant Coastal division. I don't need to mention here that Al Groh needs this if he is to continue Grohtoberfest and his annual Save-My-Job campaign.

It's going to be a close game, and what I want to do is predict this to be a tie. But hold on, I think I have a little bit of Orange Kool-Aid left in the kitchen. A standout from the 1990 team, All-ACC lineman Ray Roberts, will be at Scott Stadium on Saturday to have his jersey retired. And that, my friends, is what breaks the tie. I've chugged / OD'ed on the Kool-Aid again, and I'm predicting that Virginia shocks college football 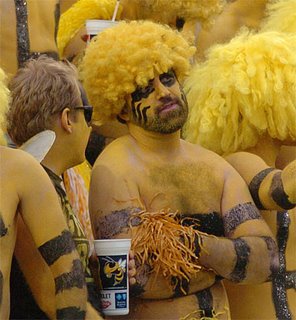 -- not only does GT not cover the spread, they fall in convincing fashion (that's the only way to keep the ACC exciting, and it always seems to happen).