Share All sharing options for: Blue Devils Outlast the Cavs

While easy to do, it's hard to say if today's loss can be blamed completely on Groh. Something went awry here, clearly, and perhaps the blame equally goes to (a) the entire coaching staff and (b) all the players? Perhaps that's a little rough.

The story line is a familiar one. The defense worked relatively hard while the offense failed to show up. The offense was able to rack up a total of 1 yard in the entire first quarter. One. They did this over the course of two drives...both of which resulted in three-and-out. They held onto the pigskin for a whopping minute and 34 seconds. The fact is that Duke dominated Virginia throughout the first quarter. To the defense's credit, holding your opponent to three field goals and not allowing touchdowns is key to keeping your mental strength up.

Sophomore cornerback Chase Minnifield, who picked up an interception that ultimately did not lead to any points, understands how important this is. "It is always good to hold teams to field goals, but we would rather stop them earlier in the drive. They were able to move the ball downfield a number of times, so we just have to make more plays."

Head Coach Al Groh was visibly disappointed in the post-game interviews. "Unfortunately, this one looked too much like some that have preceded it. We played fairly well for a long time on defense and managed to push them offensively. But however many there were-there don't need to be many, 4, 5, 6-of the plays that cause teams to lose, they took us in the wrong direction. So it's unfortunate. A lot of kids played their heart out today to make it different, but there were just too many gift points. There were 10 points we can attribute to turnovers and a couple of mental errors that resulted in long plays."

But if there's anything we've learned this season, it's that the Virginia players -- and, to be fair, the coaching staff -- don't give up easily. While Virginia was able to record 3 points in the first half off a 33-yard field goal by Robert Randolph, the Cavs showed new signs of life and offered renewed hope with a 66-yard touchdown drive on its first possession in the second half and a 1-point lead over the Blue Devils. The two teams would exchange a pair of field goals, and for a moment, Wahoo fans thought that they could just outlast the clock and avoid an embarrassing defeat to a semi-respectable Duke squad.

Things rarely play out that easily for Virginia. 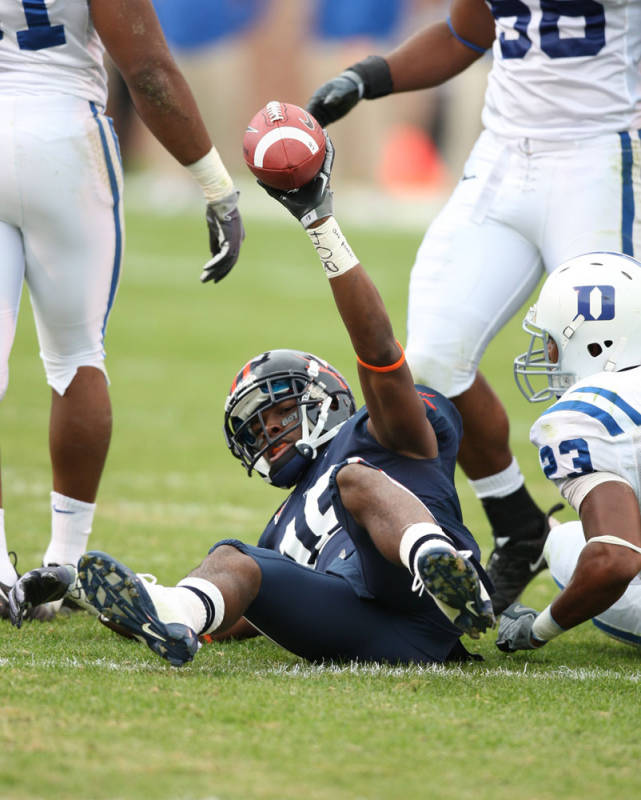 With 3:45 to go, Thaddeus Lewis, who would amass 343 yards on the day, connected with Connor Vernon for a 42 touchdown. A failed two-point conversion would give Duke a 18-17 lead, and from there, Virginia just self-destructed. I don't want to recount how many expletives I may or may not have screamed to the television. It wasn't a pretty sight, we'll just leave it at that.

I don't understand what happened in the final 3:45 that led to such an epic collapse. It was a combination of bad terrible playcalling and extremely poor execution. Jameel Sewell would try for two passes, neither of which would be completed. On third down, Duke's Ayanga Okpokowuruk forced a fumble, which would be returned for a touchdown. This series took 23 seconds.

With 3:22 to go and Virginia down 25-17, I remained hopeful. This is still just a one-possession game, and I had some confidence that we could get the 2-point conversion when necessary. Unfortunately we never had the opportunity. For reasons unknown to me, as 3:22 is plenty of time on the clock, Sewell went for two long-bombs, neither of which would be completed. On third down, Sewell would again try for a pass -- an 8 or 9 yarder -- which just sailed well past his intended receiver. Duke added an exclamation point by sacking Sewell on fourth down for a 10-yard loss. The turnover on downs would lead to a field goal and the score as you know it, 28-17 Duke.

Virginia closed out the day with just 196 yards to Duke's 424. UVA is now 116th in the nation for total offense yards.