Share All sharing options for: Hate Week 2009: UVA vs. VT

I'll be honest. I don't hate the Hokies. I don't wish for Lane Stadium to come crashing down on them mid-game like I may or may not wish on certain other teams. But that doesn't mean I don't want Virginia to absolutely obliterate them tomorrow. I recognize what a David vs. Goliath situation we have here this year, but can you imagine how embarassing it'd be to lose to a 3-8 rival? It is, after all, Rivalry Week 2009.

Virginia Tech has had a relatively decent season thus far. It obviously hasn't been the Orange Bowl bid of a season Hokie fans were hoping for, but you know what? That doesn't matter to the players. The players are just having a FABULOUS time on the field and gosh darn it, they're just there to have fun and hang out with the guys. 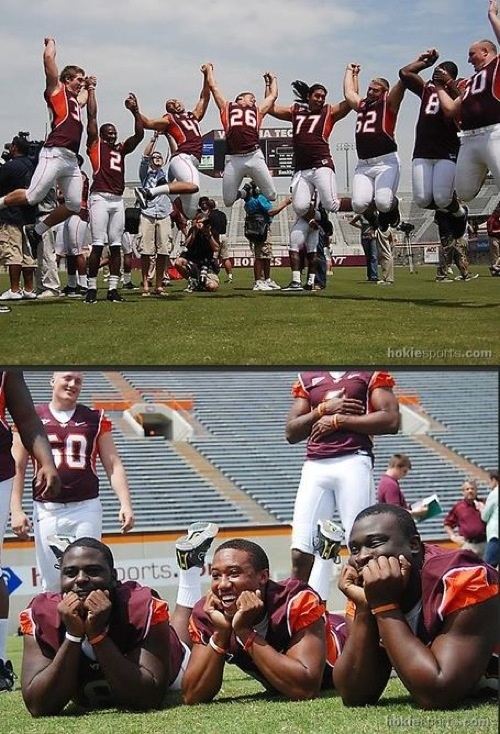 We've seen the commercials this year for Virginia Polytechnic Institute, where Amazing Happens, right? I mean, how can you hate on a school that has had such amazing accomplishments over the past decade? And to that, StreakingtheLawn presents a tribute to Virginia Tech ... where amazing happens (by "presents" I mean "pulled off YouTube").

It's going to get nasty tomorrow. Virginia has nothing left to lose except for the one thing we've been trying to get rid of for years now to no avail. Virginia Tech has everything to lose, as they try to extend their winning record against Al Groh, their greatest asset, to 9-1. And after four quarters, Virginia fans are going to breathe a collective sigh of (perhaps bourbon-scented) relief: the Al Groh era will soon be coming to an end.