Redshirt goalie Austin Geisler has not played a second of collegiate-level lacrosse, and yet he has already received national recognition for his contributions. It might not be what you think. Have a look: 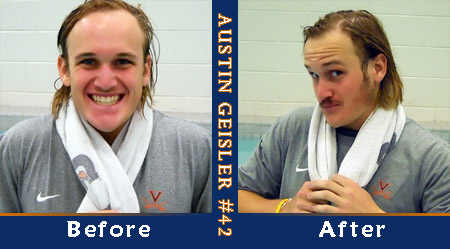 Ranked the No. 28 recruit in the country by Inside Lacrosse, and rated nationally as the No. 5 incoming goalie of his class by the same, Geisler can now add another honor to his bio: No. 3 'Stache in men's lacrosse (presumably, and women's).

The second annual Mustache Madness, founded by former Virginia player Ken Clausen, has just concluded. The event raised over $72,000 for the HEADstrong Foundation, an organization committed to finding a cure for all blood cancers through research, as well as providing grants and assistants to survivors and families, as well as students aspiring to enter the medical field. This more than doubles the inaugural campaign's $32,000 last year.

"It was a fun event for our team to do because we all looked ridiculous, yet awesome at the same time," Geisler said. "I finally got rid of it a few hours early by shaving at around 10 P.M. on November 30th. So, yes, I did go to Thanksgiving dinner at our family friend's house, and yes, I was asked multiple times why I have a mustache and look 'French.' I didn't understand the French part but once I told them the cause, they kept quiet."

For the second straight year, Virginia took home the coveted Mad Stache Trophy, raising the most money out of over 40 competing teams, raising over $11,000.

"My favorite part was dying the stache and sideburns with my roommate, Frank Price. We did it one night to darken it up a little with Hair Care for Men. I felt like Joe Dirt with the facial hair that was visible (that's what we were all going for at UVa, typical NOVer white trash)."

Virginia fans can continue to donate to the Fans of Virginia Men's Lacrosse team through ''Stache Madness. You can also view the winning mustache by viewing the winner's gallery.

"Basically, it was a lot of fun, a great cause, and I'm looking forward to doing it the next four years (redshirting this year). Spread the word and Go Hoos."