At age 26, Joe Vide, or "Joey," as his friends call him, has already experienced more than many do in a lifetime. He’s a graduate of the University of Virginia. He’s played on three Major League Soccer teams, including the 2008 D.C. United team that won the Lamar Hunt U.S. Open Cup. And in April 2010, he was diagnosed with Stage 3 Hodgkin’s Lymphoma (formerly Hodgkin’s Disease), a cancer of the blood requiring ABVD chemotherapy treatment. His insurance company informed him that they would no longer be covering any treatments, and that going forward all expenses would be out of pocket. But close friends and family have helped him raise at least some money to alleviate the financial burden. You, too, can help.

Former UVa teammate Will Hall, friend Donna Hall, and girlfriend Nicole Martinez are the masterminds behind the site and foundation, The Friends of Joe Vide. The site gives a little color on Joey’s background and some of the emotions he has experienced throughout this process. It also asks friends, family, and supporters to donate any amount they can to help him pay for the necessary treatments.

"It amazes me just how much support we have received," Nicole told us. "It blows my mind to see not only how much money he has graciously received, but also how many people support him and are thinking about it.  It's incredible!"

For Will, though, the support Joey’s received hardly comes as a surprise.

"I always joked with Joe at school, saying that if he ran for mayor of Charlottesville that he would definitely win.  He is extremely outgoing and has a great personality."

Nicole recounts for us her emotions as she and Joey learned together of his cancer diagnosis: 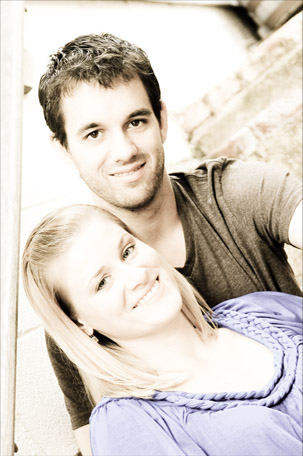 "When I first took Joey to the ER for the initial chest pains, I honestly thought it was just stress.  He had graduated from UVA in December and had been looking for jobs since the day he graduated.  It's a very frustrating process with the economy the way it is and I thought he was just starting to break down a little.  Then a few weeks later and after all the many tests we found out it was cancer.  It was a Wednesday afternoon, my school day was over and I was just about to go for a run with a teacher at my school.  I happened to check my phone right before I walked out the door and saw that Joey was calling.  I picked up and couldn't understand what he was saying because he was crying.  I instantly felt like I couldn't breathe. I didn't know what he was going to say but I knew it wasn't going to be good.  Eventually he was able to tell me the doctor said it was cancerous and I couldn't believe it.  My first thought was why him? He's so young, it's not fair!  That whole first day was obviously very hard; we cried a lot and just held each other.  I'm a fairly tough person and can handle a lot and I knew right away that I had to be super strong for Joey because there were going to be days when he couldn't be strong for himself.  I'm so thankful for my family and friends, without their support I would have no release of the stress.  It's been very frustrating dealing with all this insurance business.  Joey should only be concerned with getting better and now he has to worry about fighting with the insurance company.  It's just a sad situation and I hope it will be resolved soon."

Joey, whom everyone describes as outgoing and friendly, is also described, both by his friends and by himself, as a private person. His treatments, which last approximately four hours per cycle, have had a tolling effect on him.

"I'm an active person, but now I have no energy from the treatments," Joey told StreakingtheLawn. "That's difficult for me to handle sometimes.  It's hard to take things day by day; I wake up and realize I still have 5 more months of this.  I am really sick for about 10 days after the chemo treatment, so I have about 4 days of feeling OK, all in time for the next cycle."

"It has been very remarkable to see all the support," Joey continued. "I never expected to have this much support especially since I don't personally know some of the people who have contacted me or donated.  I'm very indebted to their generosity."

In particular, Nicole tells us that UVa men’s soccer coach George Gelnovatch and his staff have "gone out of their way to help fundraise and raise awareness," and that the soccer alumni, a very tight-knit group, has been tremendous supportive in getting the word out. Will and Nicole would like to give special thanks to George and Missi Gelnovatch as well as former players Chris Megaloudis, Chefik Simo and Kyle Rudsinski for all of their help in their respective home towns.

Alecko Eskandarian, a former No. 1 MLS Draft pick now with L.A. Galaxy, says he was shocked and speechless when he first heard the news. He is in the process of setting up an online auction with signed jerseys and team memorabilia to raise money for Joey’s fight against cancer.

"As a pro soccer player," Alecko said to us, "I have always enjoyed working with those less fortunate and volunteering for those that need help. In the case of Joey Vide, he is one of our own who can now use our help. So I am even more motivated and passionate about doing what I can to help a fellow Wahoo and friend in his time of need. And the same should go for everyone in the soccer community, not just at UVA. So hopefully we can all pitch in a little and help Joe fully recover from this terrible disease."

There have been a number of fundraisers across the country in Joe Vide’s name, including bar nights in Washington, D.C. and New York City, as well as jersey auctions and donations at games at UVa, San Jose Earthquakes, New York Red Bulls, and D.C. United, all past teams of Joey’s. Nadine and Bryan Namoff, a D.C. United player, named Joey a beneficiary of the Couture for a Cure runway show which took place on May 25.

Joey’s treatments continue through August, at which point he will have another scan to assess the progress. The next course of action depends on the results of that scan.

Will is a 2008 UVa graduate of the Curry School of Education. He played soccer with Joey and was his roommate for three years. He currently lives in Queens, NY with his wife Kate and works for Empire Surgical, a medical devices company in Manhattan.

Nicole is a 2007 JMU graduate with a degree in early childhood education, where she was a distance swimmer for their varsity team and played club water polo. She and Joey met through mutual friends when he was playing for San Jose against DC, and have been dating for nearly two years. She currently teaches in Prince William County.

Joey says that, while his professional soccer days may be in the past, he will always consider himself a soccer player. However, he also says that he recognizes that at some point, one must move on to a new goal. "I've reached that part of my life now and am looking forward to what's to come.  I still love the game and am looking to coach a team and to coach my children's teams one day."

"I just want to say thank you to everyone who has sent a thoughtful email or letter, and thanks to those who have donated on the website.  Thanks to all my friends and family for being there for me when I need you.  I'm looking forward to this being over and living the rest of my life cancer free!"