Share All sharing options for: The Cost of Virginia Athletics' Uncompromised Excellence

UVa finished a best-yet third in the 2009-10 Directors’ Cup, the award for the best overall athletic program in the country. But how much does all that excellence cost?

Virginia spent around $63 million on its athletic programs during the 2008-09 academic year – the latest for which information is reported. That’s 28th among all 119 Football Bowl Subdivision schools which earned Directors’ Cup points. Twenty eighth in spending, in exchange for third in winning is a pretty good trade. In fact, UVa is nearly twice as efficient as the average FBS school when it comes to converting dollars spent to Directors’ Cup points. 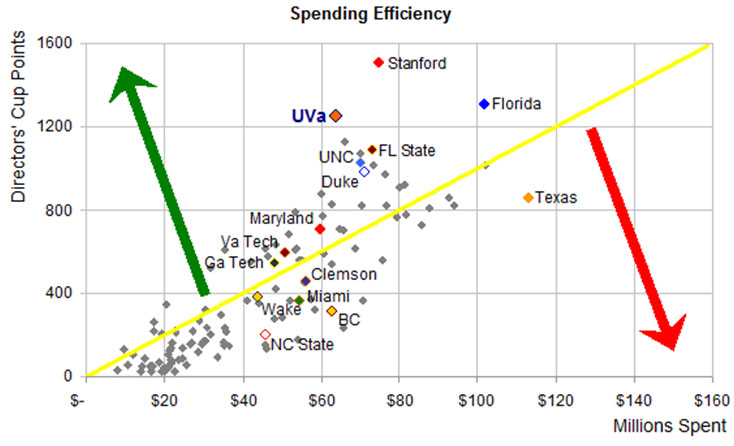 Efficient programs are those above the yellow line, inefficient programs those below. The further a school is from the line, the better (or worse) it is at turning athletic expenditures in to on-field success. For the math-inclined, the yellow line is statistically significant, at well over 99 percent confidence, even when forced through the origin. Spending explains about 70 percent of the variation in Cup points earned.

By the Point Efficiency measure, UVa leapfrogs Florida, which finished second in the Cup. Traditional powerhouse Texas – which finished 15th in the Directors’ Cup – is an inefficient spender, with a Point Efficiency of just 0.76. Private schools appear to be slightly better at spending their money, and also spend slightly more than do the publics.

Among the ACC, seven schools are above the line, while the remaining five – Wake Forest, Clemson, Miami, Boston College and NC State fall short. The Wolfpack brings up the rear with a lowly 0.44 Point Efficiency.

Spending and winning are – of course – very different from making money. That’s particularly true when, like UVa, a school excels in non-revenue sports. The so-called revenue sports aren’t exactly living up to their name, either. The NCAA, in 2008, its most recent study, found that just over half of football and men’s basketball programs at FBS schools brought in money. Only 25 of 333 Division I programs saw positive net generated revenues in 2008. That’s just seven-and-a-half percent of schools in the black.

They key here is the difference between generated and allocated revenues. Generated revenues are the ones that athletic departments actually earn: ticket sales, TV revenue, sponsorship, alumni donations, money from the NCAA. Allocated revenues, on the other hand, are given rather than earned. This money is primarily student fees or transfers from the university, and the NCAA estimates that it makes up 29 percent of all Division I revenues.

At UVa, where 2008-09 revenues were less than a million dollars more than expenses, $12 million was allocated from student fees. From a generated revenue standpoint, the ‘Hoos are in the red. The Cavaliers are beating the national average, though; that $12 million is less than 20 percent of all revenues. The Virginia Athletic Foundation goes a long way toward making up the difference and keeping allocated revenues down. The VAF is the single largest revenue source, contributing nearly $16 million in 2008-09.

So UVa wins on the field (diamond, court), and spends its money wisely. But we have a ways to go to join the vaunted 25 programs which turn a profit on their own. Football ticket sales and guarantees made $10 million in 2008-09. Have you renewed your season tickets yet?