Virginia's Chase Minnifield to return for final season at UVA

Share All sharing options for: Virginia's Chase Minnifield to return for final season at UVA

Cavaliers fans can rejoice -- the anchor of Virginia's secondary will return for his senior season at Scott Stadium. Junior cornerback Chase Minnifield announced today on Twitter that, after discussing with his family, he will play out his final season. Hopefully his senior year will be productive, and the NFL will await him afterwards. 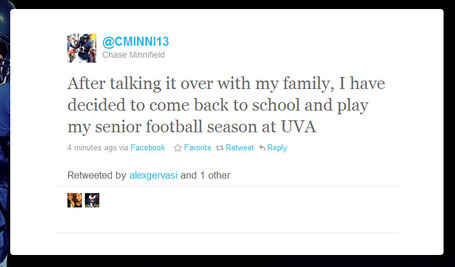 Minnifield was named to the second-team All-ACC, and received an honorable mention from the SI.com All-American list. He finished the regular season second in the ACC and sixth nationally with six interceptions. He also had 48 tackles and four pass break-ups.

"lets go get these W's," Minnifield tweeted immediately after. He also tweeted, that "[It's] all about these WINS now."

Wahoo Nation is glad to have the stand-out cornerback return, and the Cavaliers should have a great season coming up.