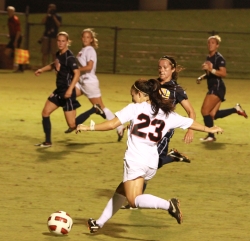 There's one more day of regular season competition left for the ACC's women's soccer teams. This Thursday, all 11 teams will play their final regular season game, with 10 of them competing against an ACC foe.

Currently, the Cavaliers sit tied for second place with North Carolina with 19 points. Both have a 6-2-1 conference record. They're one game behind conference leader Duke who has 22 points on a 7-1-1 record. Wake Forest is in fourth place with 18 points and a 5-1-3 record.

What's important is that Boston College has only 15 points on a 5-4-0 record. That means that, no matter what happens on the final day, Virginia cannot fall out of the top four. And why is that important? Because the top four get to host the first round of the ACC Championships this year.

So the Cavaliers are now guaranteed to host a first round game this Sunday, October 30th at 1pm. The only question is... who will they play?

Basically, while the eight teams that will play in the ACC Championship are set (N.C. State and Clemson are already mathematically eliminated), their standings and who they'll play in the first round are far from set.

Confused yet? That's ok. Lucky for you, you don't have to figure it out. You just have to wait and see what happens on Thursday.

Virginia takes to the pitch at 7pm at Klöckner Stadium. The game will be available for live streaming from VirginiaSports.com.