Virginia has not beaten Duke in the past six tries, and in fact has only won once in the past 16. There's absolutely nothing to suggest that the Hoos will pull off the win, but that doesn't mean we the Cavalier faithful won't take a swig of that orange kool aid beforehand and see what happens. While the meeting between the two teams last month resulted in a lopsided 16-point loss, the game was nowhere as close, as Virginia led through most of the game and had as much as a 10-point lead over the Blue Devils.

Will Sherrill missed Virginia's last game against Florida State due to his fractured right fibula, which he had suffered at Minnesota and had re-agitated on February 5 at Miami. His absence was certainly missed, as Virginia found themselves once again with a four-guard lineup. At the time of this post, there has been no word as to whether or not he would be available to play. Coach Bennett had expressed concern over his mobility on the court, as well as his general pain threshold.

Duke averages 84.3 points per game -- fourth in the nation in production. By comparison, Virginia has only scored more than 84 points once this season - the 87-79 winning effort at No. 15 Minnesota, so far this season's signature win. The Hoos average only 62.7 points per game, 305th in the country, though Virginia

I don't really care what the terrifying numbers next to Nolan Smith and Kyle Singler's name says. If Virginia wins out the season, we're looking at a 9-7 record and quite possibly a trip to the NCAA Tournament.

Alright, I recognize the absurdity of the last statement. Virginia's secret to success this season has basically been to make the game so dreadfully ugly that no one knows what's going on. Next thing you know, the Hoos are either up or only slightly behind. Unfortunately, this tactic generally works only for about 25 or so minutes before folks start catching on and we start seeing some real basketball on the floor. 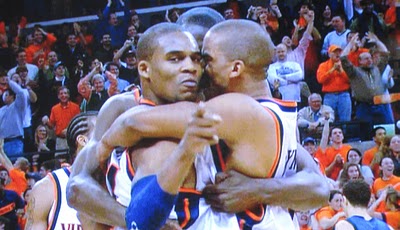 Leave your pre-, in-, and post-game comments here.