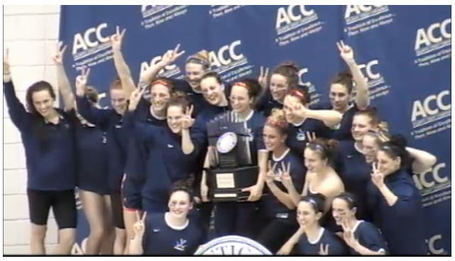 The graduating senior class at Virginia has won an ACC title every year they were here.

"This class has been motivated to be the best they can be, every day, for four years," Virginia head coach Mark Bernardino said. "They are as close as sisters - their bond is unbelievable. I knew they would never refuse to give in; they have such a strong belief in one another."

The win is big for the team's emotions as well. All of Virginia's swimmers bore an "FC" on their faces to honor the late Fran Crippen, former Cavalier and brother of current senior Claire Crippen.

Perdue posted both a championship and conference record with a time of 47.88 en route to her second-straight title in the women's 100-yard freestyle.

In what proved to be the championship-clinching event, the Cavaliers swept the podium in the women's 200-yard butterfly. Freshman Rachel Naurath paced the field with a 1:55.88, followed by senior Liz Shaw with a 1:57.85. Crippen took third with a 1:57.98. All three met the ‘B' standard.

Virginia capped the meet and ensured their fourth-straight title with a victorious run in the women's 400-yard freestyle relay. Led by Perdue, seniors Kristen Moores and Hannah Davis and freshman Emily Lloyd, the Cavaliers posted a time of 3:15.68. Maryland came in second with a 3:17.44, followed by North Carolina with a 3:19.11. The top nine teams posted ‘B' cuts.

What really won it for Virginia was not any particularly dominating wins along the way, but rather the depth of this team. Many of Virginia's points came from consolation finals, etc.

A total of five "A" cuts were hit by ACC student-athletes, guaranteeing them a bid to the 2011 NCAA Championship. North Carolina's Carly Smith met standards in both the women's 100- and 200-yard backstroke events.

The 2011 ACC Men's Swimming Championship will be held Wednesday, Feb. 23 through Saturday, Feb. 26 at the Georgia Tech Aquatic Center as 10 teams vie for the conference title. Live action will be available on the ACC Network on theACC.com Friday, Saturday and Sunday from 7 to 9 p.m.