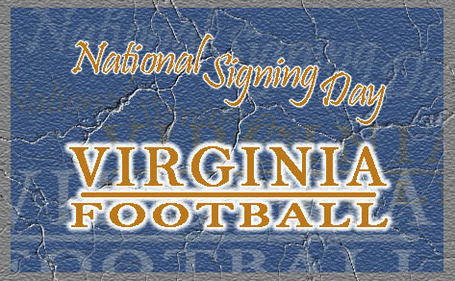 In his first year as head coach of the Cavaliers, Mike London has placed Virginia back onto ESPN's radar -- and this time, not as the victim of an opponent's breakout performance. The 2011 National Signing Day, which brought in a unanimous top-25 recruiting class, has re-energized Virginia fans, who of late have tried to ignore signing day and, well, football generally.

Heading into signing day, Virginia had 24 commits, two of which were already enrolled (and therefore technically count as the Class of 2010), and were waiting to hear from three highly sought after players: 5-star linebacker Curtis Grant and four star athletes Dominique Terrell and Darius Jennings. While Grant committed to Ohio State, both Terrell and Jennings chose the Wahoos over North Carolina, Virginia Tech, West Virginia, and a combined 38 offers.

It's not just these two last-minute commitments that give Virginia fans reason to celebrate. Virginia finished the day with both the Maryland and Virginia Gatorade State Players of the Year in Jennings and Demetrious "Trey" Nicholson, respectively. In addition to Nicholson, Jennings and Terrell, Brandon Phelps and Clifton Richardson round out the five ESPNU 150 recruits that signed with Virginia yesterday.

Most notably, London found a way to recruit in-state. Virginia's 17 commitments from the Commonwealth are the most in a UVa recruiting class since 1990. In fact, four of the top ten players in the state, as ranked by The Roanoke Times, signed with Virginia, as compared to Virginia Tech's one. These include Nicholson, Terrell, Jay Whitmire and Richardson. Virginia signed almost half (12) of the top 25 in the state.

London also made huge gains for the program in the talent-fertile 757 area. Of the 17 commitments, nine hail from the Tidewater region -- compare this to the Hokies' one, in an area that Virginia Tech has dominated in recent memory.

"Hopefully within the state of Virginia, with a lot of the great high school coaches that are there that we've extended our hands and embraced it as soon as practices are open, meetings are open, anything that we can do to get them on Grounds, we're looking to do that. We'll continue to keep trying to find ways to have better relationships with high school coaches in state and in those areas that are touching us."

That London was able to bring in such a highly rated recruiting class is a true testament to the players' faith in the new coach, and that folks really are "buying into" the system. Say what you will about London's coaching at Richmond and whether their national title was a result of the man at the helm or recruiting classes and personnel at his disposal, but for now, London's doing everything right in Virginia.