With yesterday's announcement that Virginia head coach Debbie Ryan would be stepping down at the end of this season, questions are flying about who will be replacing her at the helm after her 34 years of service. This came out yesterday from @wbballhoopscoop on Twitter. 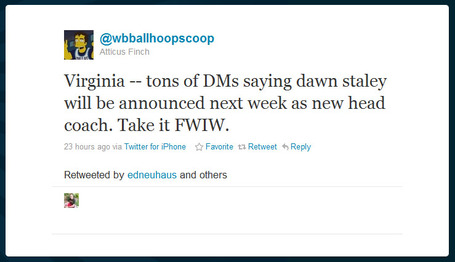 This twitter account had announced on Thursday -- two days before the official release -- that a "big announcement" would be coming, also suggesting, "Retirement!?"

Of course, there are certainly some issues with this, considering that South Carolina is still waiting to hear if they are post-season bound (NIT or otherwise), and under NCAA rules, a head coach can't be contacted before the end of his or her team's season.

While leading the Gamecocks, Staley's team went from 2-12 in the SEC in the regular season during her first year there to a very respectable 8-8 regular season conference record, tied for fifth in the conference.

I think Staley would be a great replacement. Thoughts?