Virginia has nine on the list, up from the seven last year. This includes two second team selections and seven fourth team selections. Four are on the defensive side of the ball, four are on offense, and one specialist also made the cut.

Senior DE Cam Johnson and senior CB Chase Minnifield lead the way for the Cavaliers on the second team. Johnson finished last year receiving third team honors from Steele. Minnifield had received an honorable mention on SI.com's All-American team. Johnson finished last year No. 5 in ACC with 14.5 tackles for a loss and No. 6 in the ACC with 0.54 sacks per game.  His tackles for a loss rank No. 12 all-time for a season at UVa. Minnifield finished last season No. 2 in the ACC and No. 7 nationally with six interceptions.

Senior punter Jimmy Howell was named to the fourth team for the first time. He was the first punter in Virginia history to throw a touchdown. He averaged 42.2 yards per punt in 49 tries.

Up from last year's seven, but still, only two players coming in the 1st, 2nd or 3rd teams. Phil Steele's is the only publication I know of that goes four deep. What do you say -- was anyone snubbed? Is Minnifield better than VT's Jayron Hosley or FSU's Xavier Rhodes?

Virginia ranked sixth in the ACC for number of players who made the list: 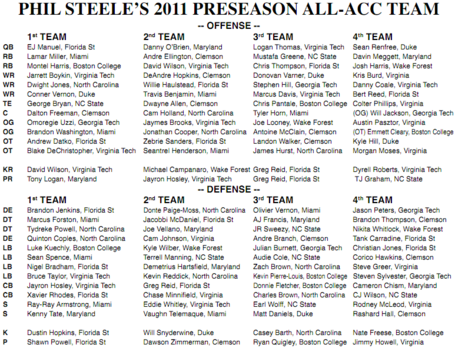