The Hoos are in the College World Series for the second time in three years. Thinking about heading out to Omaha with the boys? There's tons to see, do and eat while you're out there, but we wanted to spotlight just a few of them, including some Virginia-specific festivities.

First off, you'll need to know where to go for the games. The new TD Ameritrade Ballpark replaces Rosenblatt Stadium, which was home to the College World Series from 1950-2010. The ballpark is located in downtown Omaha, on 1200 Mike Fahey Street.

Fun fact, known to many UVA baseball fans but perhaps not so much by passersby: A reasonable likeness of Brian O'Connor can be found on the statue outside the stadium, The Road to Omaha, by Omaha artist John Lajba. Lajba was commissioned in 1997 to create the sculpture for the 50th anniversary of the CWS in 1999. The sculptor said that, while O'Connor is not represented individually on the statue, he used a photograph of him as inspiration for part of the statue, which portrays a group of players celebrating a victory. He and O'Connor's father, John, are good friends. The statue was rededicated at the entrance of the new ballpark just this past Wednesday.

The main attraction, as you all know, starts Sunday at 1:00 p.m. central. But like any good Cavalier, you'll be ready to get the party started early. The official pre-game tailgate will be at The Pavilion (The Pav, anyone?) on the corner of 14th and Cuming streets, the closest corporate hospitality tent and reserved parking to TD Ameritrade Park. There's an all you can eat, all you can drink buffet, and it's just $35 for UVA fans! Here's where you can get the low down on buying passes, what it includes, and more. 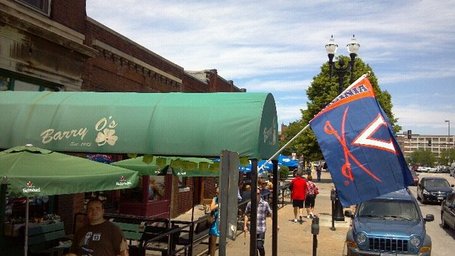 If you're going to Omaha and want to really create a ruckus, you're going to need a posse. Can't find one? Head over to Barry O's Old Market Tavern, which is proudly flying this flag until, as they say, "O'Connor and the boys win it all." Coach O'Connor worked at this fine establishment back when he was in college, and his UVA jersey is even hanging on the wall. This is the official UVA bar for the next two weeks, and it's at 420 S. 10th Street, less than a mile away from the new stadium.

There are also many attractions, shopping, food and bars with live music within walking distance of the ballpark.  This is an entirely new area for Omaha - the majority of these stores and restaurants have opened up within the past year. Here are just a few things you might be interested in checking out:

The ballpark is about a ten minute walk from Omaha's Old Market.  If you haven't had a chance to explore the Old Market, it is an excellent arts and entertainment district with fabulous dining, shopping and nightlife, including:

The team is staying at the Doubletree Guest Suites by Hilton, on 7270 Cedar Street. You can get in touch with the hotel at (402) 397-5141. If rooms there are booked, try any of these hotels within walking distance of the park:

For a list of more attractions, dining and shopping, check out the Virginia Athletics Foundation's landing site. Thanks to Corrie Oberdin with the Omaha Convention & Visitors Bureau for helping us put this together.