The final installment of our "Year in Review" series....and we saved the best for last:

Winning the Tewaarton Trophy, the award for the the top NCAA lacrosse player, makes Stanwick a pretty solid candidate.  Stanwick had previously been somewhat of a stagehand for the Bratton show, so the dismissal of the twins seemed like it should've left a talent and leadership gap; however, Steele had been coming up big all season.  He displayed his nerves of Steele (surprised it took me this long) with clinching overtime goals to pick up huge wins at Stony Brook and against UNC at home, and he finished the year third in the NCAA in assists and fourth in points.  Ultimately, it was Stanwick who led the Hoos through a midseason swoon and willed this team to a championship.

Overview: Entering the spring, UVA was consensus favorites to win the 2011 NCAA championship.  With Shamel and Rhamel Bratton returning for their senior year, joining Stanwick, Chris Bocklett, Colin Briggs, and goalie Adam Ghitelman, all the pieces seemed to be in place to finally go all the way.  While the Hoos came out of the gate strong, beating quality Stony Brook and Cornell teams, the group never seemed to completely gel.  The bottom dropped out down the stretch; the Hoos lost at Hopkins, never competed against Maryland at Scott Stadium, then lost consecutive games to Duke, the latter in the ACC tournament, by a combined 15 points.

The slump was highlighted by disciplinary troubles for the Brattons.  Both missed multiple games, reportedly for violations of the team's alcohol policy.  Repeated violations resulted in Shamel's dismissal from the team and Rhamel's indefinite suspension, one that lasted the remainder of the year.  From there, whether because of good fortune, a renewed mental focus, or a strategic recalculation, UVA went from hopeless to champions.  A removal of what had been a distraction to the team probably resulted in some "addition by subtraction."  Providing a spark, the offense ran through Stanwick playing behind the goal; defensively, Starsia switched to a zone, tightening up what had become a porous unit.

In the NCAA tournament, UVA required a dramatic comeback to squeak out an overtime win at home against Bucknell.  From there, the Cavaliers rolled over Cornell and Denver to set a date with Maryland in the final.  Behind 5 goals from Colin Briggs, they outlasted the Terps 9-7 to win the 5th title in program history.

The high and low points of the season are pretty obvious: 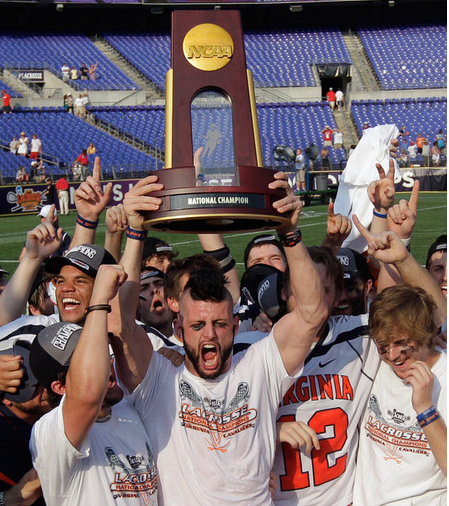 Season Lowpoint(s): Getting demolished 19-10 by Duke in the first round of the ACC tournament.  Between their hopelessness on the field and the loss of their two stars, Hoo would have expected this team to go on to win it all?

Future Outlook: The 2011 UVA lacrosse team was a perfect feel-good story, a group that focused and persevered despite hardships on and off the field.  It's a long way away, but I don't expect the 2012 squad do deal with the same adversity.

Next year's major losses include the Brattons (do we classify that as a loss?), goalie Adam Ghitelman, and Bray Malpheus (seen in picture above), probably the coolest and most intimidating dude at UVA.  Stanwick, the nation's best player, along with Bocklett, Briggs, Connor English, and crew, will all be back.  With the recruiting pipeline as strong as it is and the coaching staff having months to work with returning starters, UVA will undoubtedly be a preseason favorite.

To me, as per usual with Virginia lacrosse, it's national championship or bust next year.  I recognize the difficulty of putting everything together at the right time, but the pieces will all be in place for a repeat.