After giving us a week to recover from Virginia's 13-inning, can't-buy-a-run exit from the College World Series, our friends at the Directors' Cup released the final 2010/11 season standings last Friday. Virginia finished a better-than-respectable seventh, a disappointment only in light of last year's best-ever third place finish.

(A quick refresher: The Directors' Cup is awarded each year to the best overall college athletic program. Points are earned by finishing ranked in up to 10 women's sports and 10 men's sports. Stanford wins every year. At least, every year since the incoming first years were born.)

Last year, we took a look at Directors' Cup points compared to athletics spending, and devised something we called Point Efficiency The metric measured how effective a program was at turning dollars spent in to Cup points, and compared it to the national average for FBS schools. This year, the average points bought by a million dollars in athletic spending fell from right around 10 to 9.8 (the yellow line in the chart below). 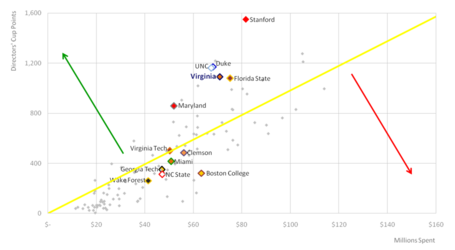 Teams above the yellow line convert their dollars spent to Cup points more efficiently than the FBS average; teams below the yellow line were less efficient. As with last year, the yellow line is calculated using this year's Directors' Cup points and last year's spending data, as reported to the Department of Education (for Title IX tracking purposes). This is based on the arguable principles of using the most recent available data, and assuming that spending takes at least a year to make an impact.

Virginia is still safely and happily above the yellow line. Relative to last year, though, when UVA ran the second most efficient program in the country, this year the Hoos were bested by nine programs in effectively making points from cash. 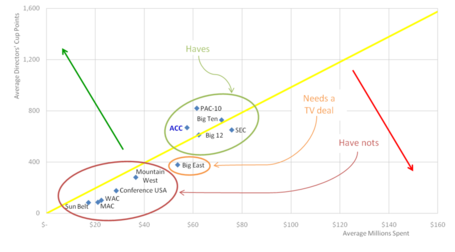 From a conference standpoint, it should be no great surprise that the BCS Automatic Qualifiers dominate the Cup points. On average, they appear a bit more efficient than the non-AQs at spending their money, but what really sticks out is how much more money they have to spend.

The ACC is second in efficiency only to the PAC-10, which gets a big boost from frustratingly awesome Stanford. AQ stepchild, the Big East, sits uncomfortably in the gap between the other auto qualifiers and those you might find listed on a BCS anti-trust lawsuit. It's hard to imagine that they're going to get much of a lift from TCU in 2012; the Horned Frogs finished 53rd in this years' Cup, with a lower-than-average efficiency (and regular travel between east coast and Fort Worth ain't free).

It's always a bit of a surprise to some people that Virginia finishes so high in the Directors' Cup, given the Hoos' recent mediocrity in the high profile sports of football and men's basketball. These people usually don't spend much time in Charlottesville in the spring. 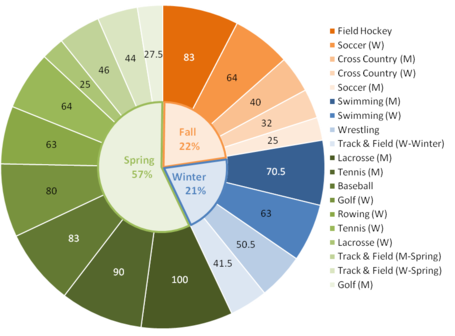 A whopping 622.5 of Virginia's 1,092 Directors' Cup points were earned this spring. The fall and winter about split the difference between the remaining points. If you counted up the sports, you noticed that Virginia only earned points in 19 sports. Had they placed in one more men's sport, the Hoos might have earned a few more points, though it would have been difficult to edge past UNC, which finished almost 70 points ahead of UVA.

What's interesting is that eight of the top-10 point earners made more of their points in the spring than in every other season. Only two (Ohio State and Oklahoma) earned more in the winter, and no one had their best season in the fall.

That pattern held for most of the other ACC teams as well. Only Boston College can claim fall as its best season (and that has more to do with a lousy winter and spring than a kick-ass fall). NC State was best in the cold months. Everyone else scored the most points in the spring. Virginia, of course, had the best spring of all. Well, not of all. In addition to Stanford, Cal and Florida managed to squeeze past the Hoos (there we go, picking at that just-healed CWS wound).