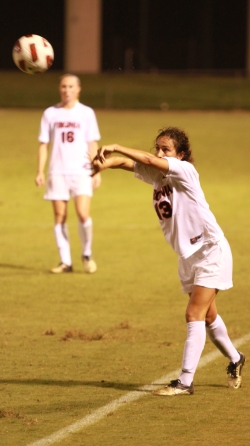 On Friday, the Virginia women's soccer team kicked off the 2011 season with an impressive 2-1 victory over West Virginia. Today, the Cavaliers continued their winning ways with a dominating 6-0 victory over the visiting Richmond Spiders.

Sophomore Molly Menchel kicked off the scoring in the 22nd minute off assists by Gloria Douglas and Amber Fry. Junior Julia Roberts added a goal less than four minutes later. She was assisted by true first-year Olivia Brannon. The Cavaliers continued their torrid scoring pace, with Gloria Douglas picking up another assist, this time to true first-year Danielle Colaprico. The Wahoos led 3-0 at the half.

Virginia wasted little time getting on the board in the second half. Juniors Caroline Miller and Erica Hollenberg notched assists on fellow Junior Kate Norbo's goal in the 49th minute. Not content with "just" an assist, Caroline Miller added a goal in the 63rd minute - assisted by Erica Hollenberg. Danielle Colaprico added her second goal of the game on an assist by Gloria Douglas in the 88th minute to cap off the scoring for the game.

The Cavaliers out-shot the Spiders 25-4, including a 14-1 margin in shots on goal. True first-year Morgan Brian led the team in shots, just as she did on Friday against West Virginia. She now has nine of the team's 37 shots.

From this observer's eyes, the story of the season through two games has been the impact that the first and second years have had on the pitch.

On Friday against West Virginia, Morgan Brian was the story of the game. The Gatorade High School Female Athlete of the Year made her debut with the Cavaliers, playing 75 minutes and scoring a goal on four shots. But she wasn't alone. Fellow first-year Olivia Brannon played the full 90 minutes and had one shot. Danielle Colaprico played 30 minutes. Sophomore Gloria Douglas had the game winner, having played 46 minutes.

Today, the young players continued their impact. First-year Danielle Colaprico had two goals while sophomore Molly Menchel (pictured above against West Virginia) had one. Sophomore Gloria Douglas had three assists and first-year Olivia Brannon added one as well.

For a team that lost as much scoring as it did from the previous year, its great to see the younger players stepping up so quickly. Its no surprise to see Gloria Douglas contributing, as she was number four on the team in points last year. But the impact a first-year class will have is always unknown until they set foot on the pitch and put laces to leather.

Although its early, this is beginning to look like a team that will not only be good this year, but for several years to come.