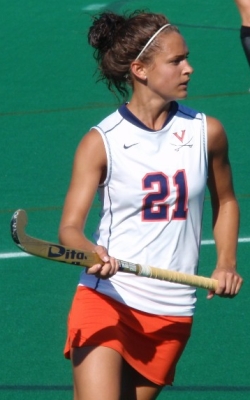 Michele Madison has turned the Virginia Field Hockey team into a powerhouse. If not for a couple of their ACC brethren, they'd be easily the best team in the country. Last year, they finished with an 18-4 record. All four of those losses were to ACC foes (three of them to North Carolina) and three of the four were in overtime. The final loss was to North Carolina in the final four - the second consecutive year Carolina has knocked the Cavaliers out in the semifinals.

With such a successful 2010 season, and their top five scorers back for this year, it would seem Virginia was poised for a breakthrough year, right? Not so fast, fellow Cavalier fans.

Fourth years Paige Selenski (who I once referred to as a beast - sorry Paige!), pictured right, and  Michelle Vittese - U.Va.'s top and fourth-ranked scorers in 2010 - are taking leaves of absence from U.Va. to train with the U.S. National Team and prepare for the 2012 Olympics. If that wasn't bad enough, they do need to replace their goalie - the graduated Kim Kastuk - and one of Madison's assistant coaches is out on maternity leave. Yikes.

But this is still a very talented team. You don't make it to the final four in a team sport like Field Hockey on the backs of just one or two players. So there is little doubt that Virginia will be competitive once again. How competitive remains to be seen.

Most years, when discussing non-revenue sports, you only have to talk about who is leaving the program due to graduation. Players don't usually leave early to go compete professionally. But once in a while something special happens. And that once in a while for the Virginia Cavaliers Field Hockey team is the 2011 season. Not only do they lose their goalkeeper and four other seniors to graduation, but they lose two of their leading scorers to the U.S. National Team. Ouch.

Losing your leading scorer is tough. Losing your goalkeeper and another top-five scorer as well is even tougher. But this team still returns talent.

Sophomore Elly Buckley was the team's second-leading scorer last year with 19 goals and 11 assists. Fellow sophomore Katie Robinson was sixth on the team in goals and eighth on the team in points. Senior Rachel Jennings also had a goal and two assists last year.

One thing I'm confused about is Junior Tara Puffenberger. She was third on the team in both goals and points last year. But she's not listed on the roster for this year. I'm sure someone (a person who knows who I am referring to) will chime in and let us know what is going on with Tara.

Like most of our non-revenue sports that are at or near the top of the nation, the field hockey team is bringing in a solid recruiting class of six players. The list of accolades is lengthier than necessary for an article of this type (lots of time on U-* National teams, All-* teams, etc), but rest assured, they're talented.

The class looks like this: Back Maddie DeCerbo, Goalkeeper Jenny Johnstone, Midfielders Kelsey LeBlanc and Jess Orett and Forwards Rachel Sumfest and Jessica White. One has to like the fact that there's a little bit of everything in the class. The class also has a very international feel to it. Johnstone is from Scotland, Orrett is from England and White is from Australia.