I wanted to take a look at things from a different angle, however. How has the Virginia athletics department fared, as a whole, compared to its ACC brethren since ACC expansion was completed?

We'll look at conference titles, national titles and director's cup standings. It won't take long to see that Virginia has definitely risen to near the top of the ACC.

Let's hit conference titles first. We've completed six full academic seasons since Boston College made the ACC a twelve-team conference. There are usually 25 conference titles handed out, but in some seasons there are some ties in some sports. In 2009 there were two ties; 2006 and 2007 both had one tie. So we have 154 total conference titles to discuss. Here's the results:

Virginia's teams claimed more than one out of every five ACC titles contested by the twelve team conference during the relevant time period. They also claimed more than 25% more titles than their next closest competitor - Florida State.

Going year by year, you'll also notice that Virginia has had the most titles of any school in a single year in the last 4 years. They tied for that honor with Maryland this past season, but held it outright the previous three years. North Carolina and Duke held the honor in 2007 and 2006, respectively.

Now lets move on to national titles. Virginia is clearly not as dominant on the national stage as they are in the conference, but the Cavaliers still come out in the top third. Let's take a look:

Maryland clearly does the most on the national stage relative to its conference performance. They average more than one national title per year that we looked at and in one year (2006) they pulled in three.

Virginia's showing is certainly respectable here. Considering that a third of the conference has not a single NCAA title to their name during this time period, having multiple titles is a good sign. You can't see it from this chart, but Virginia made it to the final four or championship game about 10 other times during that stretch. So they certainly had their opportunities to snag a few more titles.

Stanford may never be unseated as the Director's Cup champion. But there are several ACC schools vying for the spots behind them. Let's take a look at how each school finished each year:

I'm a sucker for visuals, so let's take a look at this data in a little prettier way: 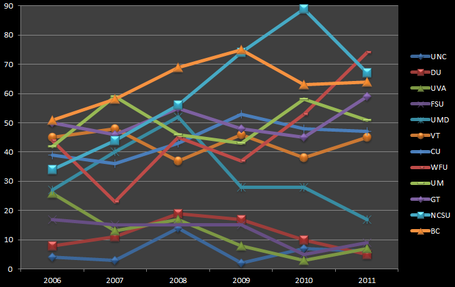 This chart shows me three things:

So what can we conclude from the above statistics, charts and graphs?

Virginia's overall athletics department has had a series of fantastic years and, as a whole, has gotten better over the last three years compared to the first three. Anyone reading this will still be able to say that we're lacking in a few spots (Football, M Basketball, W Basketball in particular, but also Volleyball and Softball), but that's not the point of all of this data.

Just think about it. The rest of the athletics department shows little to no sign of slowing down. And the "down" programs are showing significant signs of moving in the right direction. So how good will we be when it all comes together?

Stay tuned, because we at Streaking the Lawn will surely be covering it.