A solid crowd of fans, parents and student-athletes turned out yesterday at the practice fields by the McCue center to watch Virginia's first fall practice for the 2011 season.

While it was just the first practice of the year,and the players weren't even in full pads (just helmets, basically), the experience gave the crowd some new information and a few exciting moments to get them ready for the 2011 season.

As Coach Lazor had said would be the case, all four quarterbacks got a chance to show what they could do. While none necessarily separated themselves from the others, it is clear that progress has been made since the spring.

Several talented running backs got the opportunity to show what they could do - making this reporter wonder if the prediction of the one-two punch may have been a bit premature.

True first-years saw significant action on all three facets of the game. If there was any question about whether some of these talented players from the 2011 recruiting class would play this year, I think they got answered really quickly yesterday.

Let's dig in a little further after the break.

Most people probably want to know about the quarterback situation, and I can't really blame them. It's certainly one of the biggest questions as we head into the season. But I'm going to start elsewhere - a place where I was hoping to see something and ti turned out I did: The impact of the 2011 recruiting class.

It took all of five minutes for the fans to get a taste of what the 2011 class has brought to this program. True first-years Darius Jennings, Demetrious Nicholson and Dominique Terrell joined Chase Minnifield as the rotation at the punt returner slot. Terrell was pulled from the field (with no apparent reason) during that drill, but indications are that it is not a serious situation. 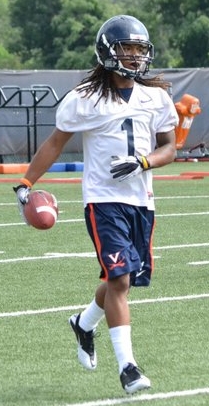 With Terrell off the field, other true first-years had plenty of moments to shine. Nicholson (right, photo courtesy of CavsCorner.com) appeared firmly planted with the first-team defense for the entire afternoon, holding down the cornerback spot opposite Minnifield. It's only the first practice, so it's hard to know whether this was a "testing the waters" or "signs of things to come" type of situation. Regardless, Nicholson looked the part and aside from what could be described as some basic freshman issues, I would say he had a very solid first day of camp.

Two other true first-years got significant time on defense. Safety Anthony Harris and cornerback (and U.Va. legacy) Brandon Phelps both saw action and both looked promising. Harris had an interception and was involved in several breakups. Neither one looked quite as comfortable as Nicholson overall, but that doesn't really say much considering this is their first college practice. They both stand a chance of making an impact for this team.

There was no shortage of true first-years on the offensive side of the ball either. David Watford (who I'll talk about in the quarterbacks section), Darius Jennings and Clifton Richardson all saw plenty of action.

Darius Jennings lined up at wide receiver at least as regularly as any other player out there. With Kris Burd having a class, the wide receiver corps was obviously not what it will be when the whistle blows, but the fact that Jennings was that big of a part of it on day one is a positive sign. He very much looks like he'll be a special player.

Clifton Richardson didn't get as many "first team" snaps as some of his other first-year counterparts did, but when he got the ball in his hands, he looks very promising. He's obviously a bigger back than either Jones or Parks (standing 4 inches taller), so his running style is different. Frankly, I'm intrigued to see what the staff does with Richardson. Does this become a 1-2-3 punch instead of a 1-2 punch? We'll probably get a better feel for how the minutes will play out as we get further into camp.

One other true first-year to keep an eye on is Daquan Romero. Because of the lack of pads, and his position (OLB), I didn't get as good of a feel for him as some of the other newcomers. But it is obvious that he is a player that will be pushing for playing time this season as well. 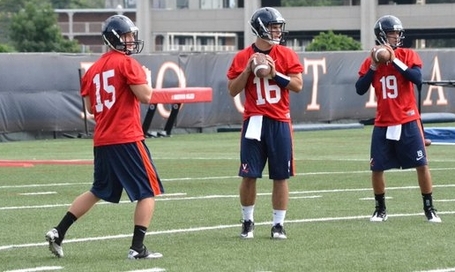 Ok, ok, I know this is the section you wanted to read anyway. Unfortunately, I've got bad news for you. I don't have much to say. It's up to you to determine whether that's a good thing or a bad thing.

All four quarterbacks look better than they did in the spring. More comfortable, better touch on the ball, perhaps even some more velocity from a few of them. But we're still in a situation where none of the four of them really stands out as the clear winner.

Ross Metheny looked the most comfortable out there and had perhaps the best decision-making (as much as you can have in 7-on-7 and pad-less 11-on-11 drills). The other three were not far behind, however. Watford is definitely the most improved, but that should come as no surprise since he's a true first-year (and, in fact, it's only because he enrolled early that we can even really measure improvement for him). Michael Rocco and Michael Strauss both looked just fine for the first day of fall camp.

At this point, its still too tough to call and I would hate to be the coaching staff trying to make this decision as soon as possible. Perhaps something will show up on the film to them that makes it a little easier. For right now, I'm still sticking to my prediction that the starter will be Rocco. But I reserve the right to change that as early as this afternoon!