Share All sharing options for: 25 Reasons to Look Forward to Virginia Football 2011

It's just a short 25 days before opening kickoff against William & Mary. Here are 25 reasons, in no particular order, why this guy is excited about Virginia Football in 2011.

2. All-American Chase Minnifield is back for his senior year and is ready for a bowl game.

3. William & Mary: Sweet Revenge. Actually, just looking forward to seeing all those Tribe alum say "Oh, we played you guys in football?" after a loss this year despite coming out of the woodwork two years ago as though they were lifers.

4. Adventures of Cav Man.  How is it that we are able to last nine straight months without seeing this in Scott Stadium?

5. David Watford. I know he's not the frontrunner right now, but I am really excited about the possibility of seeing this guy and all that poise I keep hearing about.

6. The revised 4-3 defense. Defensive coordinator Jim Reid said that he oversimplified the transition to a 4-3 scheme last year and failed to challenge the players enough.

7. Offensive Coordinator Bill Lazor. I'm excited to see him if for no other reason, because he looks so much like Dillon Panthers head coach Eric Taylor. You know who I'm talking about.

8. Obviously, the quarterback battle. It's everyone's guess whether it'll be Michael Rocco, Michael Strauss, Ross Metheny or David Watford with the start. I hope whoever it is, he steps up big time. And fast.

9. A lack of off-the-field distractions. Last year, there was a lot going on with the team in terms of shock that London was showing up at their classes and the like. No surprises this year, guys. Hopefully this means that boys will be focusing on football when it matters.

10. Morgan Moses. He lost 20 pounds over the summer, but is still a massive 335. This sophomore beast says he feels different - faster, lighter. Really looking forward to seeing what this tackle can do this year.

12. Hype machine. As the season progresses and hopefully the Ws start rolling in, I'm really excited to see who else we can pull together in the Class of 2012. 757 or bust! 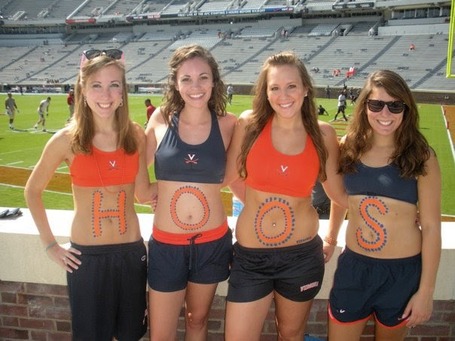 Four more reasons to get pumped for Virginia Football! (In contravention of No. 9 above)

13. More crying on the field. Look. I get it. We got joked on a LOT for Mike London's emotional breakdown on the field after the big win over Miami last year. That's something I'm willing to deal with if it means more big upsets.

14. Chase Minnifield. Yep, I'm listing him again, but I know that he opted not to enter the draft this year (Hey, if Zane Parr had good reason to enter the draft, so, too, then, should have Minnifield). So I'm looking forward to seeing him increase his stock - hopefully.

15. Kris Burd. Despite ankle injuries last season, he had 799 yards in 58 catches. He says he's 100% healthy now, so I'm hoping he crosses the thousand yard threshold.

16.   Renewed Rivalry. When the Cavaliers out-recruited the Hokies on National Signing Day earlier this year, the Hokie Nation fan base completely lost it, wondering what Beamer's problem is and questioning their life worth in general. This is the start of a momentum shift in the commonwealth, and at the very least, I am looking forward to having this rivalry be competitive again.

17. Tight End U. Who's the playmaker of this group this year? Colter Phillips, who started 10 of 12 games last year? Jeremiah Mathis, whose buzz continues to grow on a day to day basis?  I haven't had the chance to go to any of the open practices, so I'm curious who's standing out on this front.

18. I got my bowling shoes picked out! I know I shouldn't be thinking this far ahead, but I'm hoping and a'praying that we actually get to play in December this year!

19. November. Okay, fine. Before we even think about December, I guess I should get excited about maybe, maybe winning a game in November.

20. Relatedly Duke. WE CANNOT HAVE A GRADUATING CLASS WHO HAS NEVER BEEN ABLE TO BEAT DUKE. No but seriously.

21. Rodney McLeod and Corey Mosley. With the hype machine chugging along at full strength surrounding Chase Minnifield, I'm looking forward to seeing this pair of safeties come up with a big season, especially early on, as teams do everything they can to avoid Minnifield.

22. Health and happiness. For the first time in what seems to have been a long while, Virginia's got an almost all-healthy team heading into the season. This is a big difference as compared to the noticeably lacking receivers corps from last spring. The only injury I've noticed so far is Morgan Moses' boot, which is supposedly just a sprain that is not expected to present any issues. Freshman Clifton Richardson also has some hamstring problems.

23. Bourbon. Always something to look forward to when football season is upon us. Not that bourbon goes away during the rest of the year. It just tastes a little sweeter in the fall.

24. Freshmen. This is going to be a recurring storyline all year, I think. The top-25 class that London brought in this year is going to have an immediate impact on this team, and I think many of them are going to be working very hard, very fast. London said that he's impressed with, in particular, CB Demetrius Nicholson and WRs Darrius Jennings and Dominique Terrell.

25. WINNING. Remember that feeling, guys? This is the MIKE LONDON ERA. This guy is excited about 2011 Virginia Football because Mike London is righting this ship!