Share All sharing options for: Look Back: 2010 Football Offense

With less than 48 hours to go until Virginia kicks off the 2011 season, let’s take a look back at the offense in Mike London’s first year at the helm.

The personnel have, of course, changed a bit since last year; Tiki broke down the two deep for you and Brian took a look at the on-going quarterback discussion. But if past behavior is the best predictor of future behavior (or perhaps I’ve just taken too many management classes …), we can learn something from the 2010 play calling of London and OC Bill Lazor. 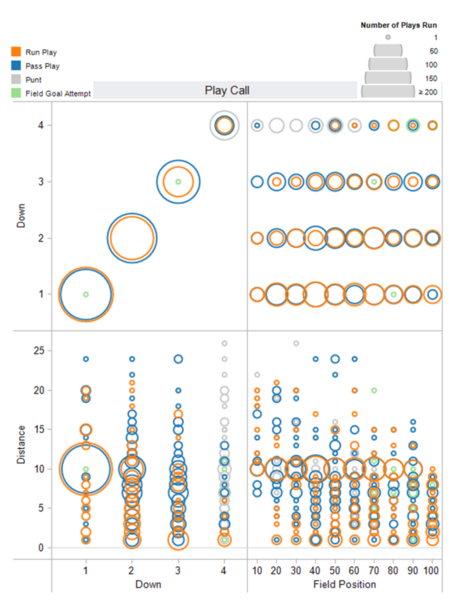 The northwest quadrant shows run/pass/punt/field goal play calling balance by down. On first down, plays from scrimmage were pretty well split between run and pass plays. On second and especially third down, the Hoos passed more than they ran. On fourth, punts were, not surprisingly, the most common call, with the balance split fairly evenly between passing, rushing and field goal attempts (the field goal circle is hard to see, since it’s virtually the same size as the run play circle).

Moving to the southwest quadrant, we have play calling by down and distance. The size of the circle is the number of plays called for that particular down-distance combination. On second down, passing plays were more often called between 11 and six yards to go; on shorter distance second downs, run plays were favored (that is, the orange circle is bigger). On third down, the yards-to-go in which passing is preferred is bigger – 13 to three yards. Fourth down shows the punt/field goal attempt/go for it decision. That call, of course, depends pretty heavily on score, time on the clock and field position, too.

Speaking of field position, the southeast quadrant shows the play call balance by field position and distance to first down. Aside from looking up any particular field position/distance combination you like, it’s hard to spot too many trends from this chart. What we can see, though, that Virginia’s tendency to pas in five- to ten-yards-to-go situations is particularly true from 30-50 yards (the columns labeled 40 and 50 above) and in longer red zone situations (the column labeled 90).

Play calling, of course, doesn’t tell us much about overall offensive production. Virginia generated an average of 5.6 yards per play in 2010, good for 37th in the country in yards per game. 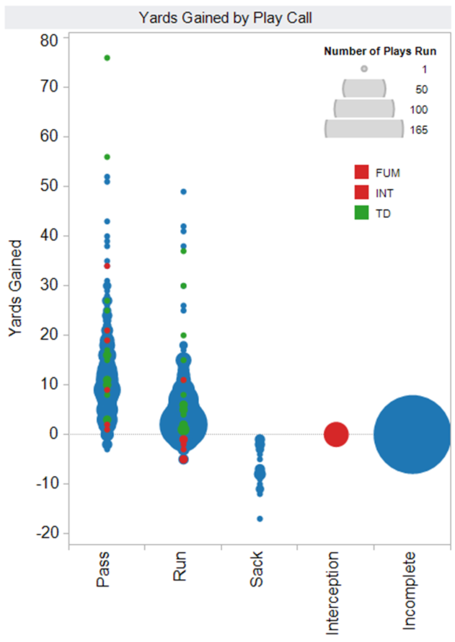 Here we can see the yards gained by Virginia’s offense by type of play. The size of the dot is the number of plays that gained a given number of yards. Like the bulk of football offenses, runs tend to result in shorter yards, but are less risky. Passes result in longer yardage per completion, but we can’t ignore the large incomplete and moderately sized interception circles on the left.

Virginia averaged 12.2 yards per completion (not to be confused with the team’s 7.1 yards per attempt). The team wasn’t much of a long threat, though, with only a dozen passing plays all year resulting in more than 30 yards (and one of those ended with a fumble). The longest play, way up at the top, was an awesome long touchdown against Florida State.

They aren’t shown on the chart, but I’d forgotten how many missed field goals the Hoos had last year. Seven! Worst in the country was 11 missed, by Northern Illinois, but those seven did enough damage – USC anyone? 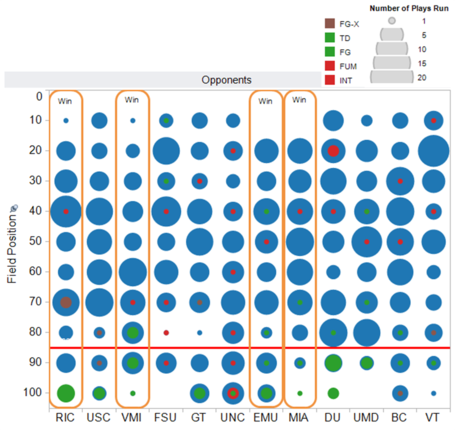 This chart shows play outcomes by opponent and field position. It isn’t any sort of detailed analysis, but you can get a general sense of what went right or wrong offensively in a given game: USC was dogged by missed field goals (to a lesser extent, so was BC, though the one field goal wouldn’t have covered the four-point difference). The Hoos had a few too many turnovers against Florida State and UNC (especially UNC in the red zone – ugh). Things look pretty good against Duke, but when your defensive gives up 55, it’s pretty hard to come out ahead. The sad story of the Virginia Tech game was how many of the plays Virginia ran from very, very far from the scoring end zone; that isn’t a pretty column.