Share All sharing options for: The View from Scott: William & Mary Edition 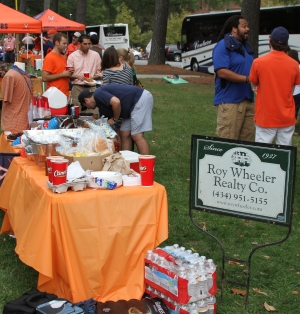 Back in my Dear Old U.Va. days, I had a series of articles called The View from Scott where I rambled on about the game from a fan's perspective. Not a lot of analysis, but a lot of general feeling, observations and random musings somewhat loosely associated with the football game.

Beginning with the Cavaliers' walloping of the Tribe on Saturday, I'm pleased to bring that series with me over to Streaking the Lawn.

I would be remiss if I didn't mention Roy Wheeler Realty, the sponsor for the Streaking the Lawn tailgate on Saturday. Without them, it wouldn't have been possible to get all of us together. Thanks also to Robert Redd for providing us with a prize to give away (nothing makes people happier than free swag... except maybe a win. Double score!). And finally, thanks to Brian for organizing  the event and making sure we had good food, good drinks and a good time.

It always makes these articles easier to write when we get a win. Easier still when that win is as dominant as the one on Saturday was. While there will be plenty of "its just William & Mary" comments tossed around this week, let's not forget what has transpired on the football field in the last three or four years. Make no mistake, this was a big step in the right direction.

So without further ado, lets get to it!

It was nice to see the defense have a consistent game. It wasn't until near the end of the game when we had freshmen in more than half the roles that the Tribe managed to put points on the board. Without a doubt, the defense was much-maligned last year. But they held William & Mary to less than 200 yards. It didn't seem like W&M ever got anything going. By comparison, I didn't feel this good about the defensive performance against VMI last year when we had a larger margin of victory.

This was my first game in my new season ticket seats in section 106. The pictures you see with this article were taken from my seats. I was a little worried if there would be too much of the "wine and cheese" crowd around me, but that turned out not to be the case. While they certainly weren't on their feet the entire game like I'm used to in the student section, the folks around me were both vocal and friendly. Props to them. 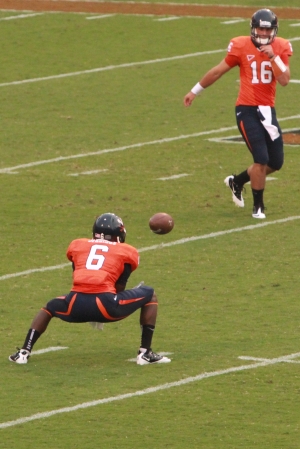 Speaking of new things, I spent a lot of time having to explain to my friends and the others around me who all these young players were on the team. Most seemed to know about Rocco being the starter, but beyond that, they didn't realize all of the talent we had brought in. The best part of having to explain all of that came at the end of the game when one of the fans turned to me to comment on how awesome Parks and Nicholson had played. Indeed.

Kevin Parks. Nice. London said something after the game about how K.P. can run through people or around them. So very accurate. Seemed like every time he got the ball in his hands he knocked at least one player over and dodged another. Looks like he averaged more than 7 yards per carry and of course he found the end zone three times.

I was making bets with the folks around me as to whether Darius Jennings would take the opening kickoff to the house. And then he dropped it. Oops. Sorry about the jinx, Darius. Still, Jennings is a very impressive athlete who I expect will draw many cheers during the season.

It was great to see Tim Smith lead the team in receiving. I had such high hopes for him last year before he went out with an ankle injury. He and Kris Burd provide a nice bit of veteran talent at that skill position to mix in with all of the young talent.

Everyone knows I'm a massive homer when it comes to our non-revenue sports. So it should be no surprise that I absolutely love it when we honor our athletes and coaches from other sports at football events like we did on Saturday.

I hear there were bathroom closings at the stadium. Did that impact any of our readers? I personally didn't notice. I did, however, notice that the lines for mixers sodas and munchies food were longer than they have been recently. Perhaps that's just a sign that the attendance was better.

Even though the pass interference call on Chase was directly in front of me, and even though I've watched the replay several times, I'm still not sure if it was actually a penalty. But the one thing I am sure about is that there was no way the refs weren't going to throw the flag on Chase when the receiver is on the ground at his feet and he's running away with the ball.

I was a little bummed that we didn't get to see more from Michael Rocco and David Watford. But it was plainly obvious that Offensive Coordinator Bill Lazor had decided to ease the quarterbacks into the game. And given that no matter who played it would be a first-time starter (not to mention how successful the running game was), who could blame him? Hopefully we'll see a little more vertical passing against Indiana.

That said, I'm also glad that we didn't get to see more from Michael Rocco and David Watford - and for that matter I'm glad we didn't have to go to Ross Metheny any earlier. No offense intended to Metheny whatsoever. But the fact that none of that happened also means we dominated the game. Which I definitely prefer when compared to seeing a few more throws.

I'll be back next week with a special edition: The View from Memorial Stadium as I travel to Bloomington, Indiana to watch the Cavaliers take on the Hoosiers and try for the first road win of the Mike London era.