Every week, Discover calls college football fans all around the country to address the issues fans care about the most. This week? Which presidential candidate do you want to sit next to at your next game? 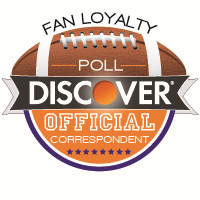 A new recurring feature for the rest of the football season is this cool Discover Fan Loyalty Poll bit. Each week, Discover polls college football fans across the country to determine which team reigns supreme.

But unlike your typical fan poll, Discover's spiced things up by throwing in some fun questions. This week, they asked fans which presidential candidate they'd rather sit next to at a game - President Obama or Governor Romney.

Intriguingly, the Big Ten is the only conference that chose Obama over Romney, and I don't mean to get all political, but they're also the conference who historically cannot count to eleven...now twelve.

Discover also asked fans which candidate they'd rather have buy a round for the stadium. Across the board, everyone picked Romney, which is somewhat expected given the media's coverage on Romney's income and taxes and all that good stuff.

Back to football, who do fans see as the top team in the country this week? That would be Alabama. Here's how the votes broke down:

I would assume that a large portion of the "Other" 10% would have gone to Florida State. Loss last week to NC State notwithstanding, I still think that FSU has it in them to rise back into the Top 10 by season's end.

For you guys, do you think that FSU is still a top team in the country? Can Clemson rise to the occasion and crack the polls? Who is primed to win the ACC this year?

The 15-week Discover Fan Loyalty Poll is conducted by Rasmussen Reports, a nationally recognized leader in polling, who gathers sentiment by phone from 800 college football fans who follow games at least once per week on television, radio, in person or online.

Discover launched the Fan Loyalty Poll to give die-hard fans a platform to showcase their dedication and love for their favorite college football team leading up to the 2013 Discover BCS National Championship Game and 2013 Discover Orange Bowl. Each week the poll will offer new questions about what college football fans are thinking this season.