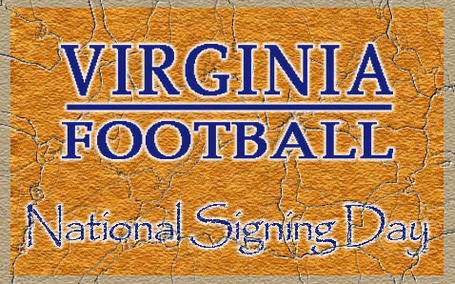 This year was a lot "calmer" by all accounts. At the start of yesterday, there were essentially no outstanding offers on the table that the Hoos were still waiting to hear back from. In fact, by 11:35 a.m., Virginia head coach Mike London and company had already received a fax from every single student they were expecting.

That's a good thing. By comparison, reports circulated the internet today of the Virginia Tech coaching staff giving an earful to a Hokie commit, Ja Wand Blue, who surprised the staff by de-committing from Virginia Tech in favor of the University of Miami instead.

"Luckily this year," London echoed, "the commitments that were made to us stuck, and hopefully today will show that our early message was consistent, and having the season we had drew them closer in terms of wanting to be here."

Virginia's commits had plenty of time to reconsider. In fact, of the 26 members of the Class of 2012, only three -- Kelvin Rainey, Canaan Severin and Divante Walker -- had not offered a verbal commitment prior to the start of the 2011 campaign.

Virginia's recruiting class is headlined by the top prospect in the Commonwealth, defensive end Eli Harold out of Ocean Lakes in Virginia Beach, VA. Kwontie Moore out of Norfolk Christian in Norfolk, VA is also considered one of the top recruits of the state.

The majority of this year's class actually comes from in-state. A couple days ago, Doug Doughty wrote a piece in the ACC Sports Journal about how Virginia and Virginia Tech did a great job this year of protecting the state's borders. In years past, the Tar Heels have had a pretty strong foothold in the Commonwealth, but this year, North Carolina failed to sign a single player from Virginia.

Also worth noting is that, of the Cavaliers' 13 Virginia signees, 10 of them hail from the fertile recruiting grounds of the 757. Oddly enough, there were no commitments from the Northern Virginia region, which is interesting considering that the Hoos held a free open practice in Alexandria, Va. last March.

In hearing the players talk about why they chose Virginia over their other scholarship offers, there are two recurring themes. The first is that the players are committing to Virginia for greater reason other than Mike London and the rest of the coaching staff. Whether it's his faith, his work ethic, or just his ability to relate to players, these signees are excited to work with these coaches and are ready to go all-in on the Virginia system. The second recurring reason is academics. Virginia continues to attract players not only because of its return to relevancy, but because of its commitment to academic excellence. For most of these guys, the dream of reaching the NFL, and the fame and fortune associated therewith, will never be anything more than a dream. They know this. Their families know this. Coach London knows this. Everybody knows this. So it's good to see many of them making these types of decisions on the value of their diploma, and I wouldn't trade that for the world.

Well, maybe. Let's see what our record is next year.

Below you'll find scouting reports, player quotes, ratings, video highlights, UVA-produced videos, and much more on each of the 26 members of the Class of 2012. Even if you were following along with us yesterday as these rolled in, you'll want to click through to the scouting reports, as Tiki has added comments to almost all of them assessing their impact on Virginia. Yesterday, he also assessed the class as a whole.