Updated ACC Standings and 2012 ACC Tournament Bracket: Virginia with a Shot at Third?

Share All sharing options for: Updated ACC Standings and 2012 ACC Tournament Bracket: Virginia with a Shot at Third?

Below is the updated ACC standings after last night's upset of No. 15 Florida State by Miami. That upset brings Miami one step closer to passing Virginia for the first-round bye in the ACC Tournament. The Hoos would win any tiebreaker between Virginia and Miami, as the Cavs came away with a one-point victory in Charlottesville in the only matchup between the two teams.

But wait, there's more! At first glance, Miami's upset of FSU doesn't do much to help Virginia out. If Virginia wins out and the 'Noles collapse, and it's a tie between Florida State and Virginia, FSU takes the tiebreak by virtue of them having beaten Duke and Carolina once each (the head-to-head would be tied, and the second-level tiebreak would be each team's record against the top of the conference).

But a second look shows that, if it's a three-way tie between Virginia, FSU and Miami for third in the conference (10-6), the Hoos would actually come up with the tiebreak. Here's the official language from the ACC:

It's a crazy world. So, for you fans out there who need to be told who to root for, cheer against the 'Noles and for the 'Canes. But most importantly, hope that Virginia takes care of its business this week.

Here's the 2012 ACC Tournament bracket, if the season were to end right now. 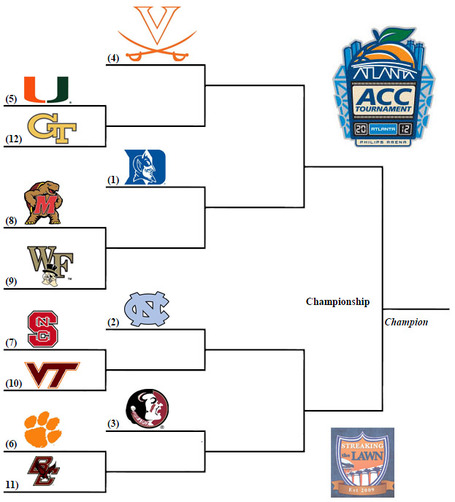