Share All sharing options for: Mike Scott Puts on a Show in Virginia 68-44 Rout of Wake Forest

If you still have any doubt that Mike Scott is really, really, really good at basketball, you didn't see the UVA-Wake Forest game (or the rest of the year...but especially this one). In a home game that the team had to win, the Hoos destroyed the Demon Decans in all facets of the game en route to a 68-44 blowout victory.

Mike Scott's performance was one for the ages. His stat line, 19 points and 5 rebounds, looks strong, though it doesn't stand out when compared against some of the best players in college basketball. However, if any of the "experts" realized that he played just 26 minutes on one of the slowest teams in college basketball, their heads may turn. Then, they may see that his 19 points came on ultra-efficient 9-9 shooting from the field. What won't show up in the box score is how Scott arrived at 100% shooting. Because most NCAA 4s and 5s rely heavily on layups, dunks, and putbacks to get their points from the field, they will typically put up strong FG percentage numbers. Of Scott's nine shots from the field, one was a layup and eight were mid-range jumpers, most of them a step from the three-point arc, and many of them contested.

Scott's shooting makes him the first player since Steve Francis in 1999 to attempt 9 or more FGs without missing. Will his performance be recognized? Pacism is a dangerous thing, and its already been demonstrated by some of college basketball's talking heads. Seth Davis tweeted the following after our game: "Tyler Zeller has 17 pts with 5 mins left in first half. I love Mike Scott but Tyler is the best player in the ACC." I'm going to completely ignore Zeller's late game "heroics" (if you are a Duke fan) and just look at that statement. Zeller is a great player who was having a great night, but his 19 first-half points came on 7-14 shooting, 5-12 shooting on jumpers, in the midst of about as many possessions as Scott experienced in his minutes. There is no doubt that Scott is the ACC's Player of the Year, but it will be interesting to see who takes heed of that. For good measure, below is Scott's shot chart compared to Zeller's, courtesy of SCACChoops.com. Rant over. 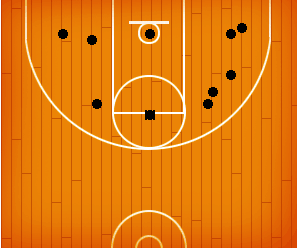 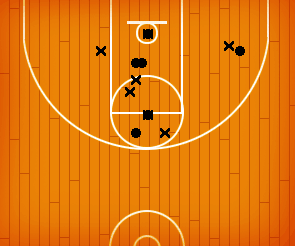 Contrary to popular belief, other players also played in the game. One of those was Joe Harris, who once again personally delivered free "Raisin' Canes" Chicken (activated when the team hits 5 three-pointers in a game) to fans by making 3 consecutive long-range shots in a three minute span early in the first half. Those extended the UVA lead to 15-7, but the Demon Deacons hung around a bit, keeping the lead around single digits until the final 3 minutes of the half. From there, UVA went on a 16-0 (and 26-2) run extending from half to half, effectively ending the game.

Predictably, Tony Bennett was pleased: "They were efficient," he said. "The ball was moving from side to side. Guys were screening and getting people open. The looks were there. That's what you hope for. That's why you practice hard and prepare. When it all comes together, it's nice to see."

Wake Forest is a pretty poor ACC team that stuggled on both ends of the floor and really didn't seem to exert much effort. So while it's good to stay grounded, the Hoos played some of their best basketball of the season from about midway through the first half to the time that Scott and Harris made early exits halfway through the second. The team scored at will, shooting 54% from the field and 43% from behind the arc (though both numbers peaked before the conclusion of the game. There was a point when we were 5 for 6 from three-point range. That was fun.) On the other side of the court, Wake Forest had no answer besides Travis McKie, who led the way with 16 points, half of those coming from the free-throw line.

There's been plenty of discussion about how minutes should be divided between Sammy Zeglinski and Malcolm Brogdon and whether Sammy will ever get himself out of his shooting slump. Though Malcolm played 25 minutes off the bench to Sammy's 22, I wouldn't read much into it; Bennett had his starters out early, so didn't exactly employ a typical rotation. Thankfully, both had strong outings. Yes, Zeglinski had just 4 points on 1-4 shooting (and 0-2 on three-pointers). However, he seemed to recognize a different role as a facilitator, distributing the ball for 4 assists and no turnovers, while playing an outstanding defensive game, forcing multiple turnovers. If he plays within himself, Sammy will only help us. Those 0 for 8 nights that lost games for us earlier this year won't be repeated if Zeglinski doesn't launch 8 shots.

Brogdon shot 4 for 5 on the evening (and 2 for 3 from three point range), on his way to 10 points. His three turnovers is something he'll have to work on as he matures, but if he has a few more "coast-to-coast" layups in him, I'd like him on the floor.

The youngsters as a whole saw plenty of playing time, with Darion Atkins and Paul Jesperson seeing 13 and 14 minutes, respectively. Paul showed us both the good and bad sides of his still-developing game. On one hand, he missed the only shot he took and picked up two quick fouls, as he clearly is still catching up to the speed of the defense. His hard block of a Wake three-point attempt fired up the crowd and demonstrated what kind of trouble his length could cause on defense. Though our "non fourth-year" lineup seen down the stretch was a bit out-of-whack offensively, being thrown into the second half of a 30-point game isn't exactly being put in a position to impress or excel.

Before we look forward to Saturday's game against the Tar Heels, who are hopefully too busy moping too pay us any attention, here are a couple non-basketball thoughts:

-Who else saw the "Quick-Change" artists at halftime? How do they do this? Is there any more amazing mystery in the world? The slate of shows at JPJ this year has been impressive as ever.

-Some GREAT signs in the crowd. I have included poor, cell-phone quality pictures of my two favorites. The "In Scott We Trust" Giant Dollar Bill is probably the most impressive thing I have ever seen. Mike Scott's mother got multiple pictures with them, which seemed like a really cool moment. The other one is just kind of silly, but I laughed at it for a while. Basically, Mike Scott is not only dominant at basketball, but at the iPhone game "Temple Run," which he often shows off via Twitter. This morning, he tweeted that he had to stop playing lest his Golden Grahams get soggy...which was memorialized in the sign in the second picture below (It reads "New high score in Temple Run - Golden Grahams got soggy. #Tragic"). If you play this popular game, take a look at some of his scores - I swear he is a better "Temple Runner" than he is a basketball player. 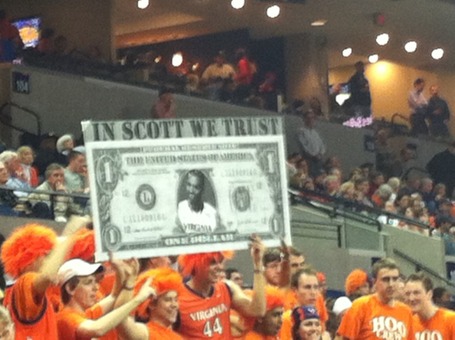 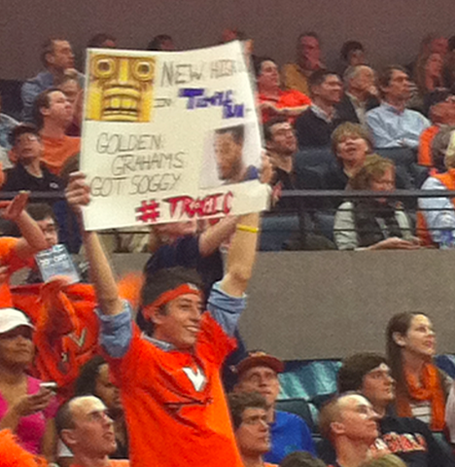 That's a wrap from John Paul Jones Arena. The Hoos start a key 2-game road trip off on Saturday, when they head to Chapel Hill to take on the Tar Heels. It will be an intriguing matchup between two teams with opposing styles, as UNC plays at the nation's 5th-fastest tempo while UVA is at 6th-slowest. After North Carolina's thrilling buzzer-beater loss to Duke, the Hoos have a great chance to kick the Heels while they are down and pick up a true statement win. That game tips off at 1PM Saturday and will be followed by a Tuesday date in Clemson.