NC State helped the Hoos out just a tad tonight by taking down Miami, who was right on Virginia's heels by a tiebreak. The Cavaliers now stand alone in fourth and continue to hold their own destiny as far as a bye in the ACC Tournament goes. If the Hoos win out, they'll finish no lower than fourth in the conference. If Virginia stumbles against either Florida State or Maryland, the scene gets a little trickier, as it opens the possibility of a two, three or four way tie with Miami, NC State and/or Clemson. Here's a look at the current standings after tonight's games:

If Virginia wins out, a 10-6 record locks the Hoos in for fourth in the conference and a first round by in the ACC Tournament. Virginia cannot pass Florida State -- even if the Seminoles lose out, Virginia will have gone 1-1 against Florida State, who wins the tiebreak there because they've defeated both Duke and UNC, while Virginia lost to both. A loss tonight or Sunday would give Virginia a 9-7 record, which would result in the final scenarios:

3. Only Clemson ties Virginia with a 9-7 record. Unfortunately, this one gets us. Virginia is 1-1 against Clemson this season, which means the tiebreaker is the schools' record against the top of the conference. Virginia was unable to beat either UNC or Duke this year, but neither was Clemson. Against Florida State though, Virginia lost earlier this season, and even with a win tonight, the Hoos would at best be 1-1. For Clemson to finish a 9-7 record, it means they'll have gone 2-0 against FSU, and therefore Clemson would receive the No. 4 seed.

4. Both NC State and Miami tie Virginia with a 9-7 record. In a tie involving more than two teams, the winning percentage of the combined records among the tied teams is used as a tiebreaker (regardless of number of games played). Virginia is 2-0 against Miami and NC State. Miami is 1-2, while NC state is 2-1. Virginia comes out ahead in this tiebreaker, and clinches the fourth seed.

7. NC State, Miami and Clemson all tie Virginia with a 9-7 record. The same process with three teams applies as with four teams. Here are the respective records for each team:

Which would mean that in the case of a four-way tie, Virginia comes out ahead with the best record (.750), NC State and Clemson tie with a .500 record (Clemson wins the head-to-head tiebreak between those two teams) and Miami comes up short.

This, of course, assumes Virginia can get a win either tonight against Florida State or Sunday against Maryland. We'll break down an 8-8 scenario if things...do not progress well tonight.

Here's the 2012 ACC Tournament bracket, if the season were to end right now. 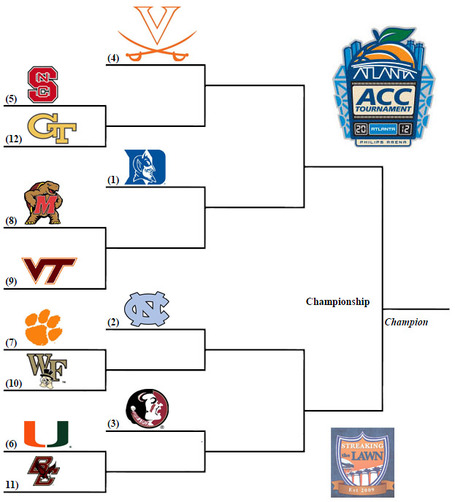