Share All sharing options for: Updated ACC Tournament 2012 Bracket: Nothing left worth watching

And just like that, so ends the ACC Tournament for the Virginia Cavaliers, who fell in the quarterfinals to N.C. State 67-64. Here's an updated bracket for the visually inclined. 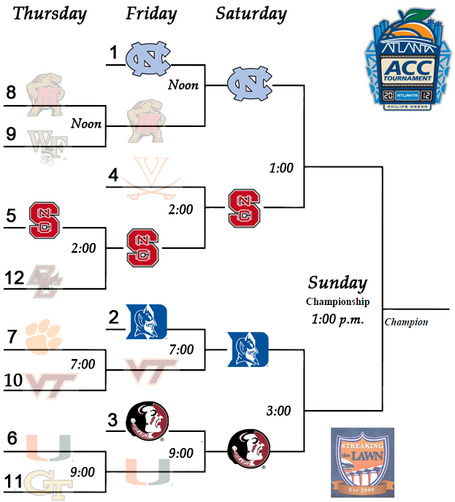 The Hoos are the only ones of the top four who fail to make the semifinals. For those on Bracketology watch, I'm fairly sure that NC State is solidly into the tournament after today's win, and a loss tomorrow to Carolina -- no matter how bad -- won't change that. I'm less confident with Virginia, whose case for the tournament just seems to keep slipping as we head deeper into March. ESPN considers us still as a "lock," though rebel Andy Katz goes against his employer and thinks we might not be as safe as folks say we are.

I don't think it's out of the realm of possibility that FSU tops Duke tomorrow, but ultimately, I think it's going to be another Duke-Carolina final.