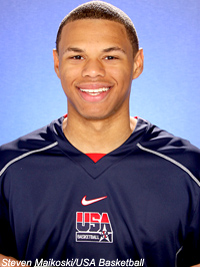 Montrose Christian School standout and University of Virginia Class of 2012 signee Justin Anderson is the Gatorade Maryland Player of the Year, it was announced today. The 6-foot-7, 220 pound forward led the Mustangs to a 21-2 record and will be playing in the National High School Invitational with his team on March 29. He is averaging 18 points, 5.7 rebounds, 4.4 assists and 2.4 steals per game in his senior season.

Ranked by ESPNU as the No. 54 recruit in the Class of 2012, Anderson also has a 3.11 GPA and volunteers locally as a basketball coach. Perhaps as part of the reason why he connects so well with Virginia head coach Tony Bennett, Anderson is also an devoted member of his church community.

This is another good pull in a series of highly rated recruits that Bennett has landed so far at Virginia. Anderson joins the good company of freshman guard Paul Jesperson (2011 Wisconsin AP and Gatorade Player of the Year), freshman guard Malcolm Brogdon (2011 Mr. Basketball for the State of Georgia) and sophomore guard Joe Harris (2010 Washington Gatorade Player of the Year).

Particularly with Mike Scott finally exhausting his eligibility this year (can anyone confirm that this is, in fact, true, and that there are no further loopholes?), it's good to see that Bennett's ability to pull in highly-touted recruits extends beyond the guard position and into the much-needed big man role.