Basketball season has come to an end for the ACC, but it doesn't mean the madness has to stop there! Piggybacking off the sudden interest to view the world only in bracket form (Pizza beats out salad, but when we're in an any-team, any-night situation, burger comes out on top in the finals, so I know what I'm doing for dinner), Streaking the Lawn is hosting 2012 C'ville Bar Madness!

The top 32 bars in Charlottesville (yes, we said 32, and yes, there are even more out there that failed to make the tournament and who are competing in the C'ville Bar CBI as we speak) have all been slotted into one of two regions and given a seed based on popularity, reputation, and overall awesomeness. Over the next few weeks, you all will vote for your favorite bar to advance to the next round, until we declare one fine establishment King of the 'Ville.

Voting will begin starting next Monday, and each round will last until Sunday evening. Votes will be tallied and the next round will be announced the following Monday, and we'll rely on you all to vote another round.

The overall No. 1 seed this year and slotted in the Blue region is The Biltmore, while The Virginian also earns a 1-seed for the Orange region. Both of these establishments serve as foundations to the Corner, and both span the generations of Virginia students, past and present.

Here's our list of Charlottesville bar participants, followed by the graphical representation, because we realize that words can be hard. 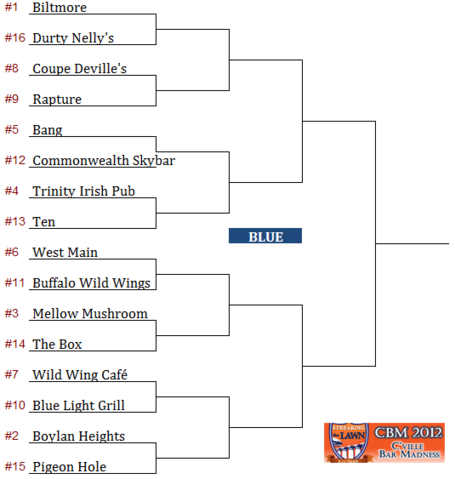 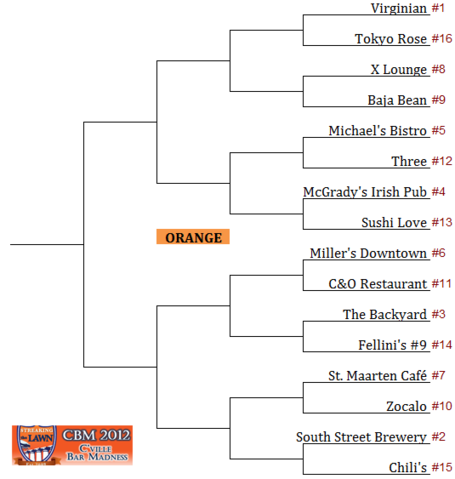 What do you think about seedings? Did your favorite bar get screwed? Is one region clearly stronger than another? Who's got the easiest path to the championship?

Remember, this is strictly by fan vote, and there are no rules as to how you can get your buddies to log on and vote. Voting starts Monday, which should give you plenty of time to draw up your brackets and make some friendly wagering!