The 2012 ACC Tournament bracket and schedule were released today, and as expected, the Virginia Cavaliers have locked up the No. 4 seed and will face the winner of No. 5 NC State and No. 12 Boston College. North Carolina received the No. 1 seed after taking down second-seeded Duke on Saturday night. If Virginia is able to move past the quarterfinals, the Hoos will get their chance to rematch North Carolina on Friday.

Virginia's No. 4 seed is their highest seed since the 2007 ACC Tournament, when Virginia was seeded second in the ACC tournament and fourth in the NCAA Tournament bracket.

For the visual learners, here's a graphic of the ACC Tournament bracket. 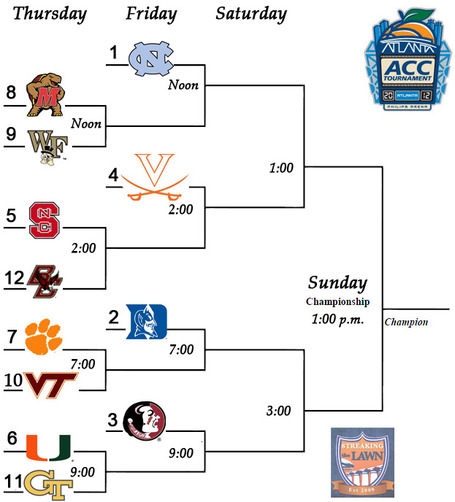 Regardless, Virginia isn't playing for naught here. A win on Friday is Virginia's best bet to get everyone on the same page in terms of securing the Hoos' NCAA Tournament bid. A loss on Friday raises a lot of concerns over whether this team is tournament-ready, particularly given the fact that multiple players are playing 37+ points a game as a result of injuries.

For the Hoos who are convinced that Virginia's in already, some tournament wins could help propel Virginia to a six or seven seed, in order to move into the lower half of a bracket (to eventually face a No. 2 seed rather than the monstrosities that are Kansas, Kentucky and Syracuse).

Virginia has a 22-8 overall, 9-7 ACC record. As far as the out-of-conference schedule goes, the Hoos have a high quality win over No. 13/16 Michigan. There are also decent wins over Drexel (playing in the CAA championship game) and Oregon (listed as Lunardi's "First Four Out"). LSU doesn't look like a terrible game either.

What do you think, Hoos? Given Virginia's record, schedule, injuries, and finish to the season, what is your prediction for the NCAA Tournament?