The opening round of the 2012 ACC Tournament is in the books, so it's time to take a second look at the updated brackets. The four kings of the ACC finally get into the action tomorrow (this is a Virginia-centric site, what do you want?), which means Virginia will get to showcase its deep (read: shallow) roster to try to string together three consecutive wins in Atlanta. But first, here's the new visual bracket: 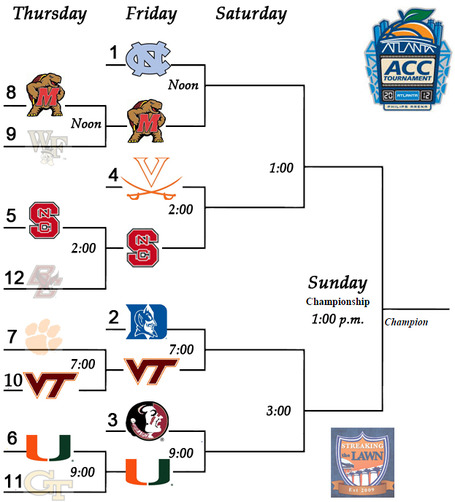 I actually like all of these games tomorrow, except I don't particularly care much about Carolina-Maryland matchup, since the Heels beat the Terps twice already by a combined 33 points this season.

Duke-Virginia Tech is interesting, as the Hokies took then-No. 4 Duke to overtime in the last weekend in February -- at Cameron. Of course, Tech lost by double digits at home to Duke back in the beginning of February, but the Hokies play a pretty competitive game against the Heels, beating them once last year when Duke was No. 1 in the country. I wouldn't put any money on Tech (since I'm not a betting man), but it should make for a good contest, particularly since Duke is without Ryan Kelly, who is missing the ACC Tournament on a sprained foot.

Florida State and Miami should also be a good game between the two rivals. Each of the teams took one game in the regular season, on their home court. The Seminoles did so by just a margin of five, while Miami, without Reggie Johnson (due to family receipt of improper benefits), did so by a whopping 16 points against the No. 16 team in the country. Personally, I'm rooting for FSU so that Miami doesn't build their bubble resume and possibly pass the Hoos.

And oddly enough, the marquee matchup tomorrow, rather than scheduled for the night game, is actually at 2:00 p.m. with the Virginia-N.C. State contest, where the winner all but punches their ticket into the NCAA Tournament, and the loser gets to stay on the edge of their seats for Selection Sunday. I seem to be in a minority group thinking that Virginia is not yet a lock for the tournament, but I don't want to risk anything. We'll have more on this contest before the matchup and in the game thread, so stick around.