The Sweet Sixteen round was nothing if not action-packed. Two contests came down to the wire, and in true Madness fashion, one even went into a sudden victory overtime. In a battle that went back and forth on Wednesday, Fellini's #9 and Miller's found themselves in a dead lock when 7:00 p.m. rolled around. Both teams had campaigned vigorously, with Miller's taking it to Facebook and Fellini's #9 calling upon reinforcements from around the country. At 7:00, voting was extended to allow for one more entry, which fell Fellini's way, giving them the sudden victory. It's the first time in the history of C'ville Bar Madness that a 14-seed has reached the Elite Eight. It's actually the first time any seed has reached the Elite Eight, with this being the inaugural tournament.

You know the drill by now -- vote early, but not often, to advance your favorite Charlottesville bar to the Final Four! We've switched poll providers so that iPhone users can now vote on their devices! We also like this provider because it gives us the ability to break down votes by IP address. 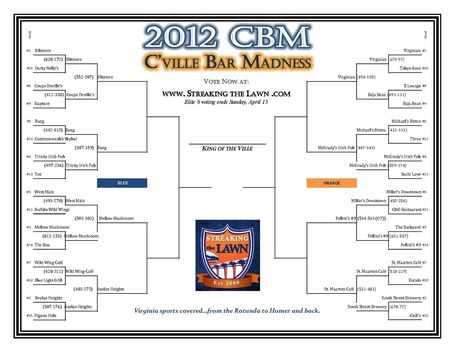 Without further ado, here are your four Elite Eight matchups. May the best bar win! Note that voting is restricted to just one time per computer.