Share All sharing options for: C'ville Bar Madness Championship Round: No Holds Barred

The semifinals brought in over 1,800 votes for each contest. Just as in previous rounds, the Final Four came down to the wire, particularly between top-seeded Biltmore against the very formidable Mellow Mushroom. The Biltmore survived -- barely -- 948 to 938 votes. St. Maarten's surged ahead on the final day and came away with a 978-898 victory. All that's left now is...to crown the King of C'ville.

Voting in the Championship Round will close at 7:00 p.m. on Sunday, April 22.

By now, you know how this works. You can vote once on your computer and once more on your phone. We're keeping a close eye on the voting to make sure it's a clean fight, so don't try anything funny. Seriously, we're not in the mood to have to deal with that.

What we are in the mood for, however, is cheap drink specials, great camaraderie, and a Pitbull mantra -- Let's have a real good time, let's have a real good time! These two bars need no introduction. The Corner has proved itself to be top dog in Charlottesville, and now we're down to The Biltmore and St. Maarten's. Get your vote on and spread the word! 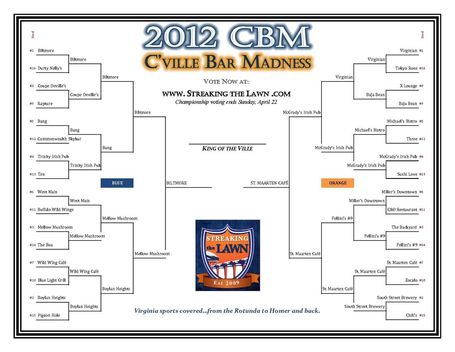