C'ville Bar Madness: Round One Voting is Open!

If you buy something from an SB Nation link, Vox Media may earn a commission. See our ethics statement.

Share All sharing options for: C'ville Bar Madness: Round One Voting is Open!

We teased you about it last week, but the time has officially come to begin C'ville Bar Madness, where you the readers will vote each week to narrow down this field of 32 Charlottesville bars down to just one -- the King of the 'Ville! As we mentioned last week, the 32 teams have been seeded, 1-16, into two different regions, a Blue and an Orange. Each round of voting will last one week -- beginning Monday morning and ending Sunday afternoon. We'll keep cutting the list in half until we announce the King of the' Ville in early May!

To help you with your pools and because this wouldn't be much of a tournament if we didn't draw up brackets, we've set up printable C'ville Bar Madness brackets for you (PDF). 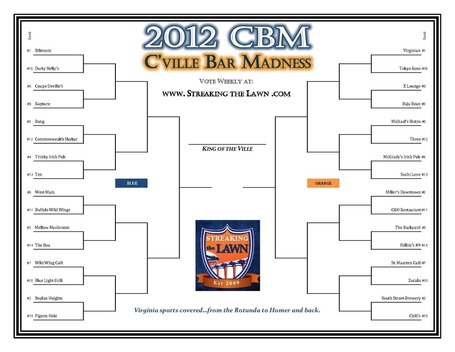 Did we leave something out of the description that is vital for that bar moving on to the next round? Does one of these places have an amazing pint night that's unbeatable? If there's anything we left out or you think other people might want to see, we do encourage you to leave comments to the post.

Without further ado, here are your 16 first-round matchups. There are a lot of polls on this page, so give it some time to load if it's struggling, and be sure to vote for all the matchups in both the Blue and the Orange regions! May the best bar win! Note that voting is restricted to just one time per computer, and since it uses flash, it may not work on the iPhone.