The votes are in, the people have spoken. Congratulations to St. Maarten Cafe for being crowned King of the 'Ville in the 2012 C'ville Bar Madness! Maarten's came out on top over the Biltmore by a final vote tally of 771-566.

Here's how the final bracket came out: 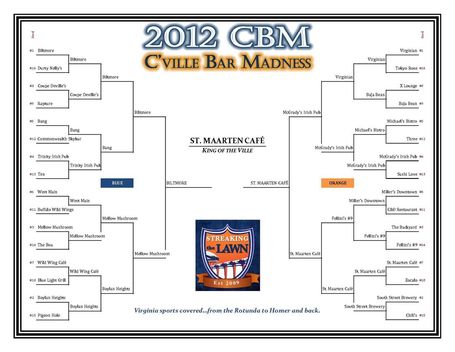 And of course, if you'd like to print out the winning bracket and post it all around grounds, we sure won't stop you.

Having closed their doors earlier this year only to reopen shortly thereafter under new ownership but still with the same concept, Maarten's was a bit of an underdog heading into this year's tournament. Still, a passionate following that spans the generations and showed up strong in the voting was what gave Maarten's over other formidable bars, whether on the corner or elsewhere.

So the next time you're in town, whether for a game or just to scope out the scene, remember to stop by the King of the 'Ville, Maarten's.

What next? Hoo wants Restaurant Madness in a few months, when the spring sports slow down?