The first round of C'ville March Madness is in the books. What started as 32 bars last week is now down to 16. For the most part, things went chalk with just two exceptions: No. 9 seed Baja Bean advanced over No. 8 seed X Lounge, and, in what can only be described as a shocking upset, No. 3 The Backyard fell to No. 14 Fellini's #9. Now, we're not saying that foul play was necessarily involved here, but it's at the very least suspicious that 1,158 people voted in that particular race when most others received between 750-800 votes. All we're saying is that we're keeping a close eye.

Voting in the Sweet Sixteen Round will close at 7:00 p.m. on Wednesday, April 11.

Note the shortened week. We'll have Elite Eight kick off on Thursday and close it off on Sunday night again. 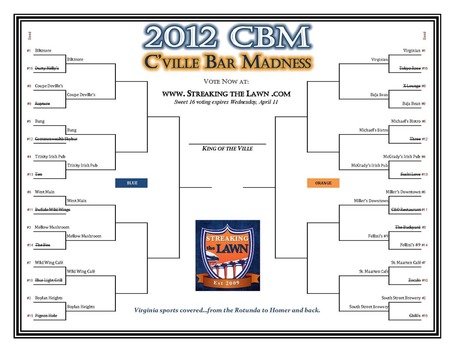 Without further ado, here are your eight second-round matchups. May the best bar win! Note that voting is restricted to just one time per computer, and since it uses flash, it may not work on the iPhone.