Now is the time that matters for Virginia Lacrosse. The fact that the Hoos lost half of their last six games is inconsequential. Virginia is four wins away from claiming back-to-back national championships, and the return trip begins on Sunday as the five-seed, against unseeded Princeton, who is ranked No. 9 in the coaches poll and 10 in the media. 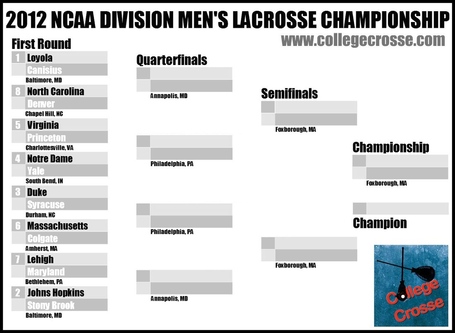 I am very intrigued at this year's matchups, and find myself having a pretty hard time drawing out my bracket. Loyola, the overall No. 1, is going to walk all over Canisius, who is 6-7 and is in thanks to the automatic qualifier from the MAAC. That's pretty much the only comfortable pick I can make.

If you're going to make me pick though -- Carolina is going to top Denver, but lose to Loyola. Virginia will be challenged and tested by Princeton, just as the Hoos were by Bucknell this time last year. The Hoos will punch their ticket to Foxboro by beating Notre Dame in the quarterfinals. On the other side, Duke has the worst draw of the tournament and will lose to red-hot Syracuse, who just crushed the Big East tournament as though they'd actually been relevant this year at all. They'll go on to escape underseeded UMass. Finally, I'll pick Maryland over Lehigh and Hopkins over both Stony Brook and Maryland, making your Memorial Day Weekend participants: Loyola, Virginia, Syracuse and Hopkins.

Championship game? Virginia over Syracuse. Book it. Order the repeat tshirts now, and because the Tewaaraton Trophy is essentially a glorified NCAA Tournament MVP award, go ahead and make room on Steele's display case for another one of those bad boys.

The action starts Saturday, and the Hoos will be the only game on ESPN on Sunday. Wahoowa.