Well, it's a good thing I'm not a betting man, because so far I've missed three of the four NCAA Lacrosse Tournament picks so far, with the only winning pick being that I chose the overall No. 1 seed to advance. Good job, Brian. Denver, Duke and Colgate all proved me wrong yesterday, and honestly the only one that truly surprised me was the Orange going down. I really thought that the Big East tournament was proof pudding that they are still Syracuse. As it turns out, they are not.

In any event, there's only one important game today, and that's Virginia hosting Princeton at 1:00 p.m. this afternoon in Charlottesville. The Hoos have actually never beaten Princeton in the postseason, losing twice in title games (1994 and 1996) and once in the semis (2000).

Princeton has only one win over any team in this year's NCAA tournament, and that came over Yale in five overtimes, 10-9. The Tigers, though, would go on to lose to Yale in the Ivy League championships by a whopping 15-7. That is to say, every NCAA Tournament team that the Tigers have played has beaten the Tigers this season -- Hopkins, Carolina, Yale, and Syracuse.

So how do the two teams compare? Here's a visual chart, courtesy of our buddies over at College Crosse. 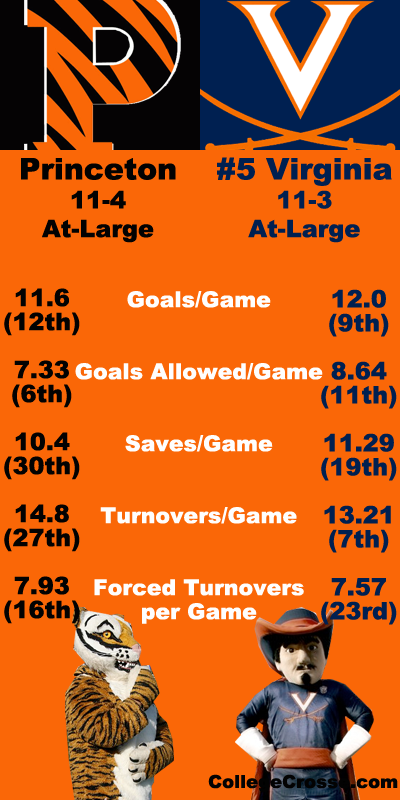 The bottom line? This is going to be a tough, tough matchup. Think back to last year's game against Bucknell, which required an overtime for Virginia to advance. I foresee a very similar battle today, though with the same end result for Steele Stanwick and company.