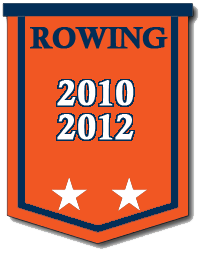 With this past weekend's NCAA Rowing National Championship, the University now has 22 national championships to its name, and its second rowing championship in just three years. Which means it's time for my absolute favorite type of update to Streaking The Lawn -- updating the Virginia Rafters

The Virginia Rafters are now flying the newest national championship banner -- check out the great success Cavalier programs have enjoyed!

If, for example, the NCAA took over men's indoor tennis, we would count the four straight that Virginia won from 2008-2011. But until the sport (or rather, the indoors version of the sport) is recognized by the NCAA for a national championship, we won't. There are a million ways to slice how you count the number of national titles a school has -- ours is but just one. Wahoowa