Share All sharing options for: Charlottesville Regional: The Weather Preview!

When you host a regional you get some perks that the other three teams don't get. Most importantly is the schedule of the first day. The threat of rain in Virginia at the beginning of June is one that every person who has ever spent more than 5 hours in the state understands. This weekend looks to be no different.

Most already know that the Cavaliers chose the first game of the regional this weekend. That game was supposed to start at 1 PM and the Oklahoma - Appalachian St game to start around six or so.

If you have been a UVa baseball fan for more than two or three years you know well that rain can have a huge impact on a regional or a super regional. Last year in the Super Regionals, rain delayed some of the games and even moved the final game to Monday. Two years ago in the Super Regionals against Oklahoma, rain delayed some of the games and forced the Davenport faithful to take cover in U-Hall. Most egregiously (in my eyes), in 2007 Oregon St. was given an extra day of rest in the regional which helped them beat us twice in as many days. The final game of that regional actually came on Tuesday!


Like I said, this year is going to be no different but it looks like Coach O'Connor might be able to use it to his favor. If UVa can manage to get their first game in (and win), they could have a HUGE advantage over the winner of the second game of the day today. The forecast is a little dicey but I think they should be able to get at least most of the game in. 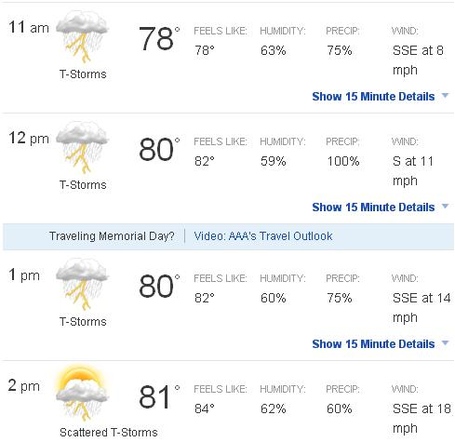 The second game of the night is a little more iffy. If you're a UVa fan you have to hope that the Cavaliers get their game in and then the rains and wind come on stronger than we have seen in quite some time. Personally, I would like nothing more than to have the Hoos sitting at 1-0 at home while Oklahoma and Appalachian St sit at Davenport field til 1030 only to have the game cancelled for the day. That would force those two to play early Saturday morning and later in the day (win or lose). The pitching staffs could be depleted and the energy level from the fielders could be down. And it certainly doesn't look good for baseball as the day progresses either: 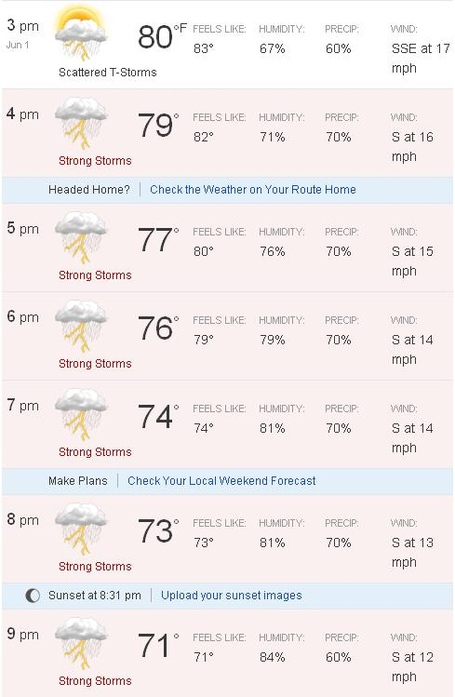 Sometimes it pays to be the host and force your opponent to do something they don't want to.