Share All sharing options for: Virginia Basketball to Embark on European Tour

Tony Bennett and the UVA basketball squad will head to Europe this weekend, setting off on a journey through the Netherlands, Belgium, and France. The NCAA allows such a preseason trip once every four years. In 2008, Dave Leitao brought his team to Canada, going 2-1 with a loss to McGill University. This season, the Hoos have a grueling itinerary, playing 5 games against 3 different teams in 7 days.

The trip falls at a perfect time for a young UVA team, allowing its 5 new incoming freshman an early chance to mesh together and with the returning athletes. Additionally, the NCAA grants 10 practices to allow teams to prepare for their overseas trips. Every bit of work counts, especially early work, and the Hoos' summer practices are currently underway (video).

Malcolm Brogdon will make the trip but will not play, as he recovers from a foot injury. Transfer Anthony Gill will be left home alone, as per NCAA regulations. Mike Tobey, Justin Anderson, Evan Nolte, Teven Jones, and Taylor Barnette will all compete in Virginia jerseys for the first time.

The Athletics Department released next week's schedule at VirginiaSports.com:

Other details of the trip and game plan have been kept under wraps for now. But here's what we know so far:

The Hoos will first head to Amsterdam for two games against the Netherlands National "B" team. We are still awaiting details of what this Dutch will consist of, but we do know that the game will be played in Sporthallen Zuid. The arena is a well-known concert venue that hosts area club sports, and its (translated) website boasts "parking for approximately 75 cars."

Next up, the team will have a travel day before taking on Gembo, a club team based in Belgium. The team competes in the 2nd division of Belgian basketball, but finished 19-7 and won the league championship, taking a decisive game 3 by an 88-72 final. Ward Lemaine won the league's Defensive Player of the Year Honors. That game will be played in Sportshal Luis Bekelaar, a small multi-purpose gym that plays host to Gembo.

Virginia will finish it's trip in Paris against AMW Team France, which will host the Kansas Jayhawks just days before the Hoos arrive. AMW is a squad that consists of players from various rosters in both the "A" and "B" levels of the French league. These games are part of a larger event called "EuroJam 2012," which will match up European pro teams with American college teams. Get pumped by watching the team's highlight video - Tony Bennett may pick up some pointers from inspirational coach Natxo Lescano who tells his team, "You don't deserve to play this sport. You must earn the right to play basketball." (Really). EuroJam is on Twitter, and advertises coverage on ESPN America, giving us hope of potential internet streams. The French arena, shown below, also looks to be the most legitimate, besides the interesting color scheme. 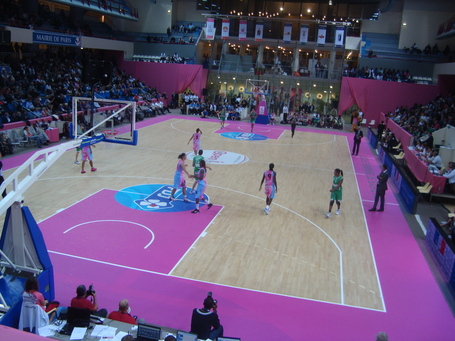 While we'll hope for an online stream against AMW on ESPN America, the Euro Trip as a whole promises to be largely devoid of media coverage. Unless Streaking the Lawn receives an unexpected donation, or the site's owner finally ponies up for airfare to Amsterdam, we'll be depending on Virginia Sports highlights and media releases to follow the Hoos. However, we will be on the lookout for any first-hand takes that we can deliver to you, and we'll keep you updated throughout the Hoo's road trip, on the site and on Twitter.

While these games are just exhibitions, there is plenty to look forward to learning and lots of unanswered questions. My biggest curiosity: European basketball utilizes a 24-second shot clock. Will anyone be able to score in that period of time against the Pack Line defense?