The Virginia Cavaliers' Inconsistencies: The Perils of Youth?

Statistics help decide: are the recent inconsistent performances the result of freshmen inexperience, or the inability of veterans to repeatedly perform at a high level?

Share All sharing options for: The Virginia Cavaliers' Inconsistencies: The Perils of Youth?

The Hoos were riding high after defeating North Carolina to open the ACC schedule. Fans were talking about the NCAA Tournament with confidence; 2013 Jontel Evans resembled 2012 Jontel Evans and the defense flummoxed a typically strong offense, while disheartening and inexplicable losses to Delaware and Old Dominion were dismissed as mere outliers. Twitter was abuzz[1] with projections that the team could[2] start out 9-0 in the ACC. First up were two surefire wins against Wake Forest and Clemson.

Ten days and two losses later we're left lamenting the Hoos inconsistencies.[3] As my last post suggested, few stretches this season have been as tumultuous as the five most recent games. The worst "standardized" game of the season,[4] against Old Dominion, was followed by one of the best, against Wofford. The big win against UNC was then followed by the flat Wake and Clemson performances. It's been a rollercoaster.

The disgruntled fan base, whether arguing rationally or completely irrationally, has sought to affix blame for the unpredictable performances. Some suggest that the team's heavy reliance on freshmen and overall youth[5] is the culprit. Others argue that key veterans are not reliably pulling their weight.[6]

As you might expect, this post will turn to statistics to attempt to answer this debate. Over the last five emotionally draining games, have freshmen growing pains caused the fluctuations in offensive and defensive quality, or have the expected veteran stalwarts been unexpectedly uneven? Which group has been more inconsistent?

A better approach is to separate points per possession based on the number of freshmen on the floor. I used the play-by-play for each of the five most recent games to create a chart of possessions vs. number of freshmen. An example from the ODU game:[8] 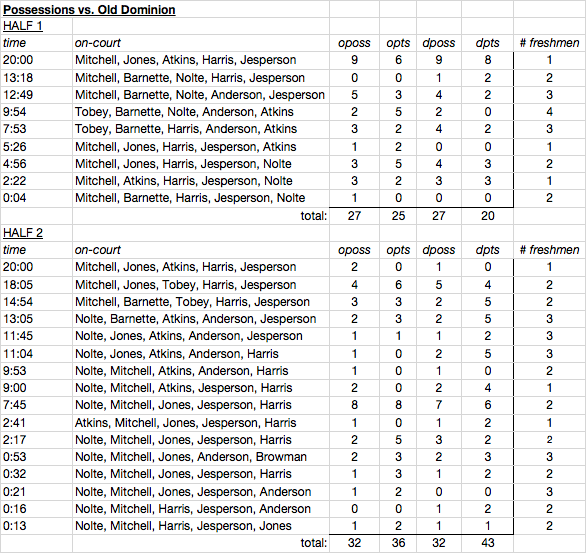 I then condensed that large chart into the following, smaller chart:

[Inconsistency in Offensive and Defensive Points per Possession]

The last column, variance, is a mathematical measurement of the spread in a given set of data; the higher the variance, the less consistent the data points are in the set.[9] I only included data points for games in which a given number of freshmen appeared on the court for at least ten possessions, to avoid skewing the results. Ultimately I limited the analysis to the 1-3 freshmen range since these were the most common team configurations throughout the games.

On offense, the one freshman and three freshmen teams were basically equally inconsistent. Contrary to what I feel is the more reasonable argument, more inexperience did not necessarily make the team more inconsistent. But the opposite argument isn't really true either. Although veterans weren't consistently shouldering the offensive load, it's difficult to give them sole responsibility for the scoring problems when inconsistency was a team-wide epidemic. The inconsistency here, at every experience level, was truly offensive.[10]

Now for the Bennett staple. The variance in defensive performance steadily increases with more inexperience. At least in this five game spread, the timeless adage about the Pack Line taking time to learn appears to be true. This doesn't suggest that the freshmen are incapable of playing solid defense, but a greater proportion of veterans gave the Hoos a steadier defensive presence. The "perils of youth" arguers win the defensive side of the ball.

Overall, offense was a push, but defensive round two went to freshmen inexperience. The whole team could stand a little more consistency, but the first years have likely contributed more to the mid-season ups and downs.

The Hoos take on Florida State in Charlottesville on Saturday. The inconsistent offense could have an opportunity to get back on track against the 110th ranked Seminoles defense.[11] As usual, a consistent Pack Line, and the friendly confines of JPJ, could go a long way toward helping the Hoos secure their second ACC win.

[3] and injuries, always with the injuries

[4] at the time of the post. Pre-Wake and Clemson

[6] those who are likely nostalgic for the "Offensive Game Plan: Mike Scott" approach

[8] On a side note, check out the difference in defensive points per possession in each half. That's just ridiculous. Tony needs to work on his halftime speech.

[9] for the non-math people