This post attempts to compare the Hoos offense and defense throughout the season independent of opponent skill, enabling a more even comparison of performance variation.

Share All sharing options for: Game-to-Game Variation in Virginia Basketball's Offense and Defense

The pregame narrative leading in to last Sunday's resounding defeat of the UNC Tar Heels centered almost entirely on UNC's vaunted offense and the Hoos' steadfast defense. After the proverbial tortoise[1] forced the hare out of his offensive comfort zone,[2] myriad postgame recaps and commentators could only ask "what's wrong with UNC?!?"[3]

But what about dear old UVA? Surely the Hoos performance had something to do with the win. This got me thinking: of course it takes a strong game to beat a good team, but was that the best the Hoos have played this season? Better than against Wisconsin or Tennessee? Did either the offense or defense contribute disproportionately to the victory?

I sought to separate the offensive and defensive performances in each game throughout the season and compare them "apples to apples;" independent[4] of the level of opponent. This post will explain the method for doing so, followed by an analysis of the best and worst offensive and defensive performances, and best and worst overall games thus far in the 2012-13 season.

To standardize the Hoos offensive performance against UNC, I subtracted UNC's adjusted defense from the average adjusted defense, which suggests that UNC holds opponents to 7.8 fewer points per 100 possessions than the average team. Looked at another way, adding 7.8 points per 100 possessions to the offensive performance of a UNC opponent would approximate that team's performance against an average defense.[7]

Better yet, we know the number of possessions in any given game. So when the Hoos played 63 possessions against UNC on Sunday, we can add 4.91[8] points to their offensive output to approximate the number of points the same UVA offensive performance would have scored against an average defense. The Hoos actually scored 61 points against UNC in 63 possessions. With the added factor based on the better-than-average UNC defense, the Hoos offensive points per possession jumps from 0.97 to a standardized 1.05.

The same calculation[9] appears for each game in the chart below. 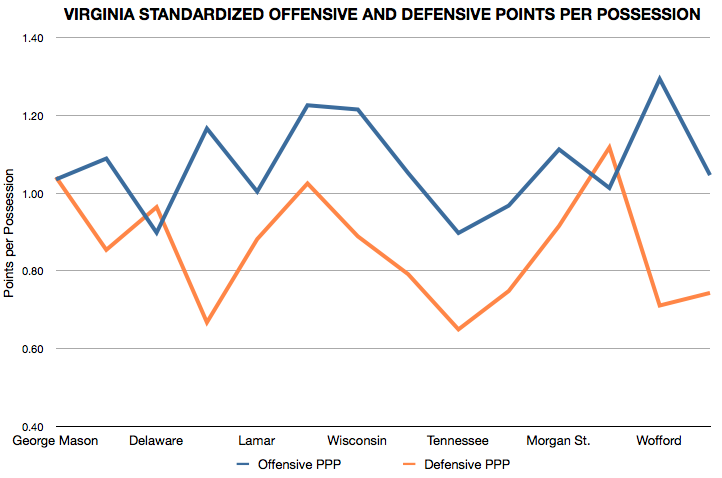 [The Best and Worst of Virginia Basketball]

The team peaked offensively against ... Wofford? Here's why: the Hoos scored 74 points against a team that Pomeroy has ranked as the 70th best defense in the country. I'll defer to Mr. Pomeroy's judgment and suggest that nearly doubling-up Wofford was more impressive than it seemed. At Wisconsin was the best performance in a high profile game, while vs. UNC was quite middling.

The curse of the CAA was felt on the offensive end against Delaware, which was actually tied for the worst offensive performance with the big Tennessee victory.[10]

Tonight, the Hoos match up against Wake Forest in Winston-Salem.[14] We'll see if they can continue their good offensive and defensive ACC start.

[1] Nearly deleted this sentence immediately after writing it due to Maryland connotations. Decided to persevere.

[2] leading to a victory that would make Aesop proud

[3] Ex: "OMG UNC was 6th in the nation in scoring, but scored their season low, 30 points below their average!" (fellow tempo-free crusaders will note the pace-based errors in addition to the influence of the Tobacco Road-colored glasses)

[4] to the extent possible

[7] Still with me? If this is getting too dry, you have my express permission to skip to the next section.

[9] except somewhat reversed when standardizing defense

[10] well, now we can pretty easily predict what the best defensive performance will be ...

[13] the data for this appears under the last column: "Difference." Here, we're looking for the most negative