Share All sharing options for: Virginia blows by Hampton 69-40

The Cavaliers recovered quickly from a rocky start, using a 34-3 run to blow out another in-state opponent.  Joe Harris had his best game of the year, finishing a perfect 7-7 from the field, leading the Hoos to a 69-40 win.  Virginia improved to 5-1 on the season, as they head off to their holiday tournament in Corpus Christi.

Harris ended the game with 20 points, as he sunk a perfect 4 for 4 from behind the three-point arc.  With the game tied at 16, and Virginia looking sloppy on both sides of the ball, Harris took the game over.  He scored 9 of UVA's next 11 points, as the Hoos stretched a tie game to a 20-point blowout within 7 minutes.

After a hot start from Hampton, the Pirates went ice cold from the field and were smothered by UVA's Packline defense. They went on scoring droughts of 8 minutes and 28 seconds, then immediately began a new one that lasted over 5 minutes.  By game's end, the Pirates tallied .62 PPP and an eFG% of just 34.6%; Deron Powers, who sparked Hampton with 6 quick points, finished by missing his next 9 shots after Justin Anderson was assigned to shut him down.

After the Pirates were able to easily get to the rim during the first 10 minutes of the game, UVA looked to focus on keeping the offense in front of them and packing in its defense even more to provide help.  Check out what happened when Hampton found itself on the interior with the ball - all 5 Cavaliers collapsed to within 5 feet of the basket: 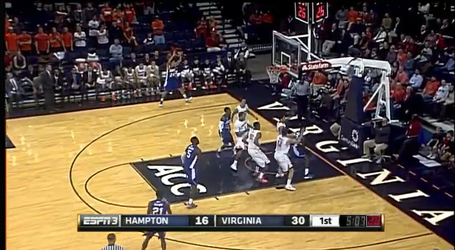 Virginia is already the nation's leader in keeping opponents off the free throw line, and allowed just 6 attempts tonight.

While the Pirate offense sputtered, Virginia's kicked into a new gear.  Harris's perfect shooting night made him the offensive star of the game, but Justin Anderson had a big night as well, scoring 12 points on 4-6 shooting, while also adding 3 blocks, 2 steals, and 4 rebounds.  He also FINALLY recorded his first dunk of the year:

I finally dunked the basketball! Mine was no where near as sick as Darions though! Oh myyy 😱

Anthony Gill and Darion Atkins both notched 7 points apiece, while Malcolm Brogdon scored 5.  UVA finished by shooting 46% on its two-pointers and 67% on its threes, a welcome sight for a team that had struggled from long-range earlier this season.  The team continued its rebounding domination, grabbing 86% of Hampton's misses and 40% of its own misses.  While Virginia came into the game #5 in the nation in defensive rebounding, it also sat at 25th in the nation on the offensive boards, an anomaly for Tony Bennett's teams.

The offensive effort wasn't perfect.  The Hoos finished with 18 turnovers, meaning 28.5% of possessions ended without a shot attempt.  Gill was a leading culprit with 4, while Mike Tobey and Thomas Rogers added 3 each.  Unforced errors were a major factor keeping Hampton in the game early.  Also, UVA's free-throw shooting woes continued, as the team made just 13 of their 23 attempts.

In better news, Jeff Jones hit a lay-up, while getting fouled, for his first career points.

With Virginia's three-game stretch against lesser opposition completed, the team looks to face a consistent slate of strong opponents.  The 12/23 matchup with Norfolk State is the only remaining non-conference game against a team ranked worse than 100 by KenPom.  (Three such ACC matchups are on the schedule - NC State and the pair with VT).  The Hoos are back in action Friday night against Larry Brown's tough SMU squad in the Corpus Christi Challenge.  The Mustangs are especially tough defensively, and will be the first team that can match Virginia's length on the interior.  That one tips off at 7:30 and will be televised on CBS Sports Network.

We'll give the last words to Justin Anderson, because he is the best: