The former Cavalier standout and MLS Cup MVP joins us in a Q&A to preview the College Cup semifinals between the Virginia Cavaliers and Maryland Terrapins. 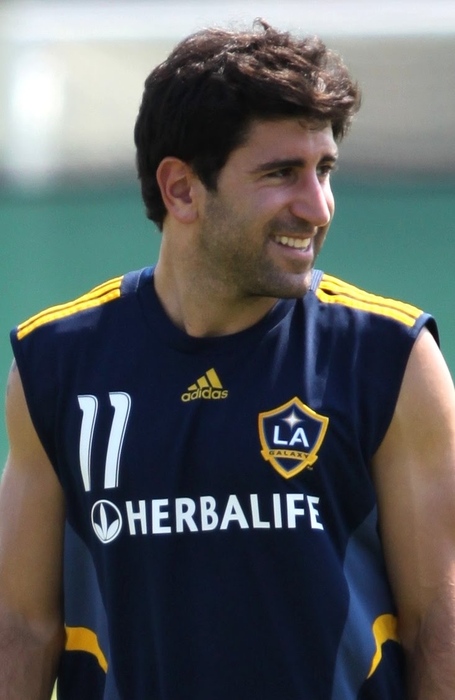 Virginia Cavaliers are back in the College Cup for the first time since 2009 and will be facing the ACC (/ B1G) Champion Maryland Terrapins in tonight's semifinals. To help preview tonight's match, we're joined by former Cavalier standout Alecko Eskandarian, who played for Virginia from 2000-2002. Alecko was named ACC Rookie of the Year in 2000 and Soccer America's College Player of the Year in 2002. Also in 2002, he was awarded the prestigious MAC Hermann Trophy, awarded to the nation's top male and female college soccer players.

Following his college career, Alecko played for D.C. United for four years, during which time he helped lead United to their fourth MLS Cup victory in 2004 and was named MLS Cup MVP.

Streaking The Lawn: With UVA having made the College Cup in 2006, 2009 and now this year, every student athlete since 2002 who's played their entire career at UVA has made the Cup. Is this bringing UVA back to the Bruce Arena era of domination, or are the Hoos not quite there yet?

Alecko Eskandarian: No, I don't think there will ever be another era like the Bruce Arena era at UVA. There are simply too many talented players now all over the country and the competition is much fiercer. Also with the most talented players leaving early to go pro, it has added a new dynamic which makes it difficult to repeat as champions, let alone win five in six years.

STL: The last time they were in the College Cup, 2009, Virginia came home with the hardware. What are the strengths of this year's team that makes you believe they can do that again this year, and what weaknesses might hold them back?

Alecko: Youth is both their blessing and their curse. UVA has got a bunch of young talented players on the field who are eager to prove themselves and want to be recognized on the national stage. They have matured over the course of the season and are playing their best soccer right now. I love the team's mentality right now, and some of the youngsters don't know any better to understand the stage they are on which is great. However, when you play tough experienced teams like Maryland, you also have to be very smart and know how to manage the game. That will be their toughest challenge. It will be fun to watch.

STL: This is the third time this season the Hoos will have faced Maryland -- the first resulted in a draw, and the second in a loss. I'm not sure if you were able to catch the first two matches, but what does UVA need to do differently this time around when facing Maryland?

Alecko: I caught bits and pieces of both matches so I can't get too detailed in my response. But I'd love to see our boys attack Maryland and put them under pressure from the get go. If we are the aggressors and can put them on their back heels a bit, then they will have to adapt to our style of play as opposed to vice versa. First goal is key in these matches so I'd love to see us go for it and play good attacking soccer. With that said, you have to be very tight and smart in the back to be able to pull that off.

STL: You played under George Gelnovatch during your time in Charlottesville. It's the night before the College Cup. What is he telling his team?

Alecko: This isn't George's first rodeo. He has been around a long time and has had a ton of success. Any team coached by George will be disciplined and will fight until the end. But I think with so many young players, the night before he is probably trying to loosen these guys up and give them the confidence to go out there and have fun but also know they must prepare for a battle.

STL: If UVA advances, they'll face the winner of New Mexico-Notre Dame. Both of those teams are looking for their first ever national title. If you're UVA, who would you rather face in the next round?

Alecko: Probably New Mexico because it's extremely difficult to beat a team 3 times in a row in one season.

STL: On a scale from one to "the worst," what are your thoughts on Maryland?

Alecko: As Wes Mantooth would say, I pure, straight hate Maryland... But damn do I respect them.

In all honesty, I love this rivalry and am sad to see them leave the ACC. Those were always my favorite games to play in and I still have ongoing banter with former Maryland players and coaches who I now have great relationships with. Sasho is a great coach and I admire the work he has done over his tenure at UMD. It's the best rivalry in the history of college soccer in terms of quality and competitiveness in my opinion. And that's a testament to the high level of all the players and coaches over the years. So I hope we can send them a nice farewell gift by beating them in their last game against us as ACC rivals.

Thanks to Alecko for taking time out of his busy schedule to speak with us as Virginia seeks their seventh national title! Go HOOS!