Does an Effective Defense Fuel the Virginia Cavaliers' Offense?

Coaches, players, and fans seem to believe that an effective Pack-Line defense causes offensive improvement. This posts uses a statistical analysis to evaluate the truth behind this contention.

Share All sharing options for: Does an Effective Defense Fuel the Virginia Cavaliers' Offense?

Tony Bennett's love of defense runs deep. So deep, in fact, that he occasionally repeats a variation of a timeless piece of coaching rhetoric, the concept that an effective Pack-Line defense will translate to offensive success. The players have bought in; after the win against Boston College, Paul Jesperson noted "when we get stops on defense, we get that much more momentum and get the crowd into it, and it helps our offense."[1] Bennett has even admitted that the reverse can be true in the rare instance that the team hits an offensive groove first.[2]

Many fans echo Jesperson and accept this as a simple recitation of the "momentum"[3] concept in sports. Indeed, it seems obvious that defense has created offense when, for example, a forced shot clock violation energizes the team, and is followed on the other end by a drained three pointer. Sustained stout defense often appears to accompany the scoring barrages that force an opposing coach to burn a timeout. This seemingly inextricable connection between offense and defense has appeared everywhere from within the team itself to the observations of fans and the pages of the Cavalier Daily, which recently discussed the "correlation[4] between suffocating defensive play and scoring points."[5]

In the face of overwhelming public opinion, we could just sit back and say: "yep, that's a pretty well accepted tenant of Virginia basketball." But that's just not our style. Instead, this post will ask: does such a correlation actually exist? Do strong defensive performances cause strong offensive performances, and vice versa? The answers follow an explanation of my statistical approach.

As repeated ad nauseam on this blog, points per possession ("PPP") are the best measure of offensive and defensive performance for a team as a whole. My approach to answering the above question, then, was pretty simple: in all Virginia games under Bennett[6], what is the relationship between the Hoos offensive PPP and defensive PPP?

Suppose the Hoos play their best defensive game of the season, or even a very strong stretch of defensive stands within a game. The game's defensive PPP will reflect that the Pack-Line effectively stifled the opponent. If the defense truly sparked the offense, the Hoos should also have a relatively high offensive PPP in the same game. So theoretically, if the Hoos offensive PPP increases as their defensive PPP decreases[7], one could argue that the effective defense is causing the productive offense. A simple plot of game-to-game offensive vs. defensive PPP would give us a clear representation of this relationship.

However, one disclaimer before we forge on and get all excited about the results: it's very difficult to say what causes good offense. Maybe the opposing team is just bad.[8] The porous opposition might just be allowing points because they can't defend, not because the Hoos are gaining momentum by shutting down their terrible offense. In this case the skill level of the opposition is what truly caused the effective offense. To further complicate matters, maybe the opposing defense is bad, but their offense is mediocre; the Hoos defense holds them to a slightly below average number of points while the offense puts up huge numbers.[9] The PPPs in that game could suggest that the decent defense caused the offensive surge.

In light of the problems raised by the disclaimer, I've added one more wrinkle to the analysis. I dusted off my previous standardizing method in an attempt to remove some of the effects of opponent skill variation. To reiterate[10], I loosely use the concept of point handicaps along with Ken Pomeroy's Adjusted Offense and Defense rankings. An example: UNC scores an adjusted 107.2 points per 100 possessions, and allows an adjusted 91.4. The average for both offense and defense is 99.7. To standardize the Hoos offensive performance against UNC, I subtract UNC's adjusted defense from the average adjusted defense, which suggests that UNC holds opponents to 8.3 fewer points per 100 possessions than the average team. Looked at another way, adding 8.3 points per 100 possessions to the offensive PPP[11] of a UNC opponent would approximate that team's performance in that game against an average defense. The same holds true on the defensive side of the ball. I went through this process for each of the Hoos opponents under Bennett to at least partially remove opponent skill from the comparison.

Even with the standardizing method hopefully improving the quality of the results, the disclaimer limits the analysis to a set number of answers. If offensive PPP increases as defensive PPP decreases, we can't definitively say: "Yes, Tony, Paul and most of us fans are right!"[12] The relationship still might be caused by poor competition, but we could conclude that "Tony, Paul and most of us fans" are potentially correct. Any other relationship between offensive and defensive PPP would suggest that effective defense does not fuel offense, or vice versa.

On to the graphs!

First we'll take a look at the PPP correlation graph for all games under Bennett. 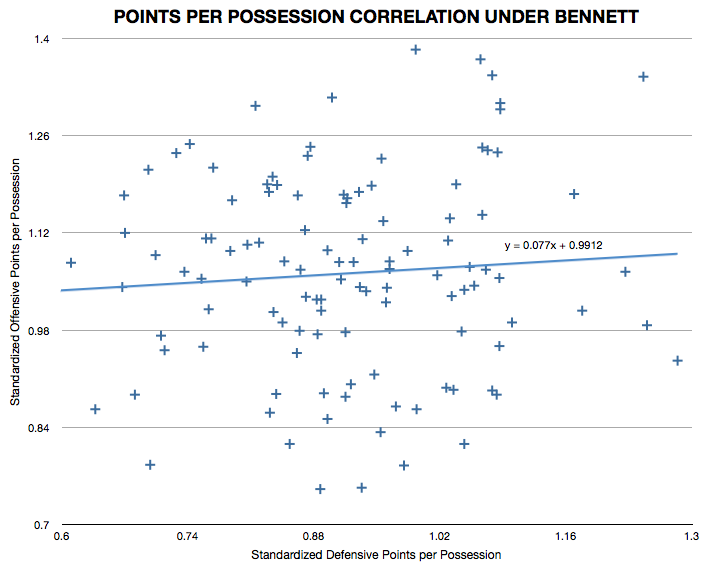 So does offensive PPP increase as defensive PPP decreases? No. No it doesn't. As the Hoos defensive performances improve, their offensive performances actually get slightly worse. The decreasing offense isn't an extremely strong relationship, though, as a massive 0.50 improvement in defensive PPP gives a paltry -0.04 decrease in offensive PPP. We can't pull a complete reversal and claim that good defense causes bad offense, but it certainly doesn't seem to cause good offense either. Defensive and offensive performances are just independent of one another. Tony's influential insistence on the overarching benefits of strong defense appears to be nothing more than coachspeak. But let's take a look at two other sets of games, just to be sure. 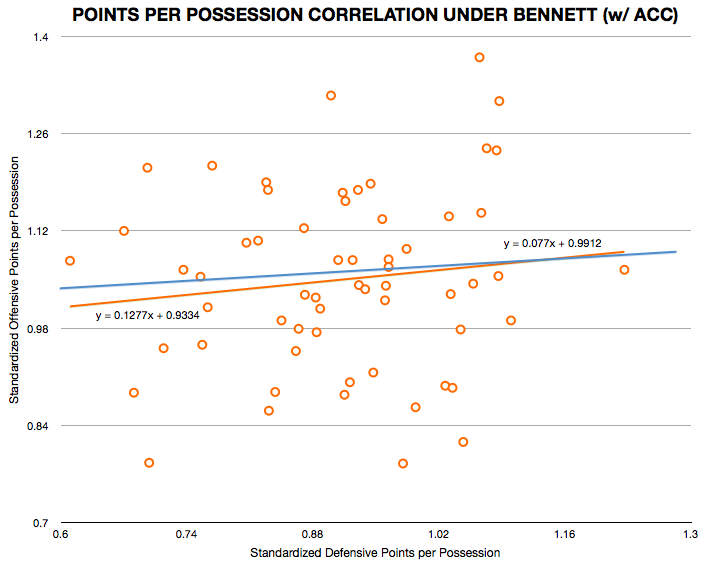 Separating out the ACC games in the above graph shows the PPP correlation in higher-pressure games against a consistently high level of competition.[13] Although some potentially skewing out-of-conference outliers have been removed, the result remains the same. A solid Pack-Line still does not spark the offense. 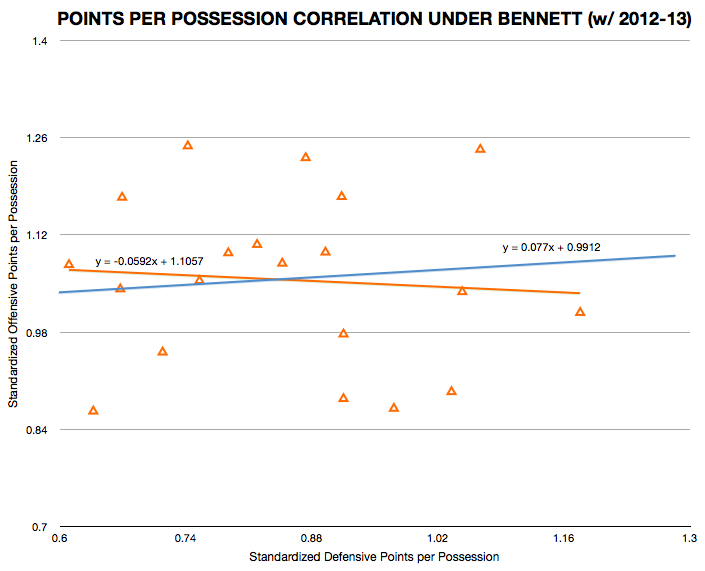 Our final breakdown shows some promise. Games from the current season have a slight correlation in favor of "good defense = good offense." However, first, the sample size isn't large enough to make a strong case. Second, the correlation isn't very strong here either. Just like we couldn't say good defense caused bad offense in light of the first graph, we can't really say that the even smaller slope here proves the opposite. This season generously receives a grade of "incomplete."

This series of PPP correlation graphs quite definitively suggests that offense is not affected by defensive performance. On Sunday, the Hoos travel to Georgia Tech and attempt to continue their recent roll in the ACC. Look for Justin Anderson track-back blocks, continually improved defense from Mike Tobey, and an overall lockdown from the Pack-Line; just don't credit these plays if the offense continues to improve.

[2] After the 20 point win against Florida State, Bennett conceded "we shot the ball so well, and that energized us defensively"

[3] If your first thought was "p=mv," and you like Virginia sports, then you're definitely in the right place

[4] although they called it the "oft-unheeded" correlation, which I would disagree with

[7] which, again, is better. just a reminder since it can be a little tough to keep all of this stuff straight.

[8] Although that didn't stop the Hoos from playing extremely poorly against ODU ...

[12] Well, you can always say that if you want, it just wouldn't necessarily be true

[13] the blue line is just from the first graph, for reference