A tempo-free, bias-free guide to the ACC Player of the Year and First Team award contenders with five games remaining in the regular season.

Share All sharing options for: Your Field Guide to the ACC Awards and Virginia Cavalier Joe Harris' Candidacy

Life in the ACC wild can be hazardous. Virginia faithful often encounter rabid turtles, turkeys, wolves, and assorted other fanbases who expend substantial effort ignoring or demeaning Virginia basketball's standing in the ACC. Presumably due to the crippling mental affects of rabies, these opposing fans often ignore reasoned discussion and relevant statistics, instead relying on the endangered points, rebounds, and assists per game.

Joe Harris and other Hoos have far exceeded expectations. However, their contributions have been partially buried by certain predatory perspectives in the ACC.[1] These Hoos face an uphill battle for ACC award consideration.[2] This post will serve as your field guide to supporting the Award candidacies of Joe Harris, other worthy Hoos, and any deserving ACC stars independent of longstanding bias. I'll introduce the discussed statistics before offering picks for the ACC Player of the Year and First Team as the regular season winds down. Equip yourself with these reasonable, objective numbers and proceed with caution.

Tempo-free trailblazer Dean Oliver created the all-encompassing[3] Offensive Rating ("ORtg") statistic, which ambitiously attempts to measure the "points produced" by an individual player. The statistic accounts for field goal shooting, free throws, assists, and offensive rebounds. It's one convenient, and pace-independent, number that allows a comparison of players who produce offense in different ways, whereas the common adherence to points per game favors volume shooters who play on fast teams. We'll use this statistic as our baseline in the player comparison to remove some of the common major biases.

Oliver also tied his ORtg into offensive possession usage ("Poss%"). "Usage" ends a possession and can be good, like a made shot, or bad, like a turnover or a missed shot rebounded by the other team. Possession usage can be viewed as a measure of a player's offensive responsibility. A high ORtg with a low Poss% indicates that a player performs at a high level offensively, but still isn't entrusted to carry the team, while conversely a low ORtg with a high Poss% indicates that a player shoots poorly and often. Accordingly, Oliver divided the ORtg - Poss% interplay into three categories:

This still doesn't tell the whole offensive story. Suppose, in an extreme example, that a player's role is to come onto the floor for a few possessions per game and shoot threes.[5] If that player shoots well, his ORtg and Poss% will both be high even though he's not really commanding the team's offense. So, as one final offensive stat, we'll also look at Minute%; the percentage of total possible minutes that a player is on the floor. This will also help reveal how important a player is to his team.

With these hopefully interesting stat intros out of the way, let's pick the ACC Awards with five games remaining in the regular season.

Despite our reverence for Harris, we can all admit that he's unlikely to be deemed the ACC Player of the Year. Nevertheless, the analysis for this award substantially overlaps with that for the ACC First Team, so it's worth also making a pick for the more prestigious award.

The charts below compare the above statistics for two groups of ACC players:[7] those who meet Dean Oliver's "offensive star" criteria,[8] and those who do not meet the criteria but are nonetheless receiving hype as potential Award candidates: 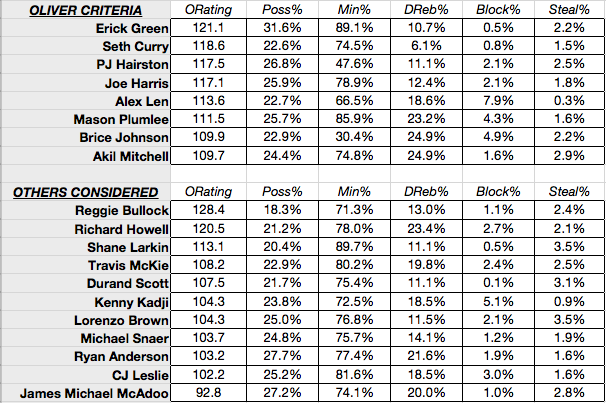 --- Player of the Year: Erick Green

Erick Green absolutely dominates these statistics. His ORtg is second only to Reggie Bullock, but he maintains this high ORtg while using an absolutely absurd 31.6% of his team's possessions.[9] He may be hogging the ball, but he appears to be doing so with good reason. He also almost never leaves the floor, and contributes moderately well in the defensive statistics in comparison to other guards.

Plumlee and Howell are strong contenders for the best forward in the league. Howell fares better with his offensive chances than Plumlee, while Plumlee appears slightly better defensively. I'll lean heavily on Oliver's categories and suggest that Plumlee's greater offensive role and time on the court make up the difference and put him slightly ahead of Howell in the overall "best forward" race. Still, I think Green's substantially better offensive efficiency and responsibility offset Plumlee's defensive stat advantage.

So now I find myself in the unenviable position of having to defend a Hokie. [10] The widely repeated knock on Green is the fact that he plays on one of the worst teams in the ACC. The classic Tobacco Road line is: "well he's good, but what would happen if he were a Blue Devil?" Well, his role on the team would probably decrease closer to the other levels seen on the charts, but suggesting that a player contributing that much would be relegated to Poss% and Min% number far below the other star levels on these charts is just delusional. He'd still have a significant role on any ACC team. Furthermore, there's substantial support for claiming that his ORtg would actually increase in the process.[11] What would happen? The best player in the league might get better.

The ACC typically chooses 2-3 guards and 2-3 forwards to comprise the First Team. I'll start with two of each and add a third where warranted. We've already established above that Green, Plumlee, and Howell deserve first team recognition.

The second guard spot has a few worthy contenders: Curry, Hairston, and Harris are the most noteworthy. The rising Shane Larkin has a lower ORtg and Poss% than each of these three players without any overwhelming defensive advantage. Although Hairston's stats are frighteningly similar to Harris', Roy Williams has mysteriously awarded his strong offensive output with only 47.6% of the Heels' available minutes. Hairston is a sometimes star. Curry is narrowly better than Harris in ORtg, but accounts for fewer possessions, and is comparably a non-factor on the defensive boards. In a hopefully bias-free pick, I'm choosing Joe Harris for the second First Team guard spot.

I'm going to go out on a potentially homer limb and suggest that Akil Mitchell is the third best forward in the ACC. His closest competition in tempo-free statistics comes from Alex Len and Kenny Kadji. Compared to Kadji, Akil performs better with his offensive opportunities,[13] is responsible for slightly more of his team's offense, is a better defensive rebounder, and steals the ball more often. Len is a closer competitor. On offense, Len performs better but with less responsibility and significantly fewer minutes; in another nod to Oliver, I'll narrowly give the offensive edge to Akil. On defense, Akil rebounds better and steals better, but is severely overmatched by Len's Block%.[14] Still, calling defense a push is somewhat generous to Len. The third best forward spot narrowly goes to Akil Mitchell.

The final question is whether Mitchell deserves the last First Team spot over Seth Curry. Unfortunately for Mitchell and Hoo fans, I don't think his defensive advantage makes up for nearly 10 points of ORtg in an award that heavily favors offensive output. Mitchell should be the first choice for the Second Team.[15]

The final five games of the regular season are critical for the Hoos and will affect the aforementioned Awards races. Making the NCAA Tournament could go a long way toward getting Harris and Mitchell more recognition. Hopefully, in crunch time, these two rise to the occasion and strengthen their ACC Award qualifications.

[3] "mostly-encompassing" just didn't have the same ring to it, see what it actually encompasses in the next sentence

[4] as you can probably tell, the category titles are paraphrased

[6] Except us Hoos who love defense. And Wisconsin fans. And people who have an appreciation for the game of basketball as a whole.

[7] These charts do not include stats from last night's games

[9] Typically, as the Poss% increases, a given player's ORtg will decrease. More offensive responsibility usually means a player has to look for his own shot more, and can't be as selective with his attempts. There are whole posts just a Google away that are dedicated just to this concept if you care to learn more.

[10] Caution: excessive pro-Hokie material ahead, skip to the next section if you begin to feel nauseous

[12] I promise I tried to keep this objective, despite the caps lock and Streaking the Lawn's overwhelming representation among charter members of the Joe Harris Fan Club

[13] despite inexplicable strings of missed layups

[15] but undoubtedly won't be, even if he continues this level of production