Mike London picked up the highest rated prospect of his tenure in Charlottesville this afternoon, when 5-star safety Quin Blanding made the call for the 'Hoos.

Quin Blanding announced Virginia was his choice this afternoon at Bayside High School in Virginia Beach. Blanding stars on defense at Bayside as a safety, as was recruited by almost every school in the country. Blanding chose UVa over offers from Alabama, Florida, Auburn, North Carolina, Ohio State, Michigan, Virginia Tech, Clemson, Tennessee and many, many others. The Virginia Beach native is rated the #4 player in the nation by Rivals, #7 overall by 247Sports, and #10 overall by Scout.com, and is a consensus 5-star prospect. Blanding is the consensus #1 safety in the nation as well. Quin is former high school teammates with current Cavaliers Demetrious Nicholson and Anthony Cooper, as well as Virginia signee and fellow 5-star Taquan Mizzell.

Quin Blanding is a big, rangy safety who can cover a ton of ground and get to the football in a hurry. As a junior, Blanding recorded 111 tackles and 5 interceptions, playing against some great competition in the Tidewater. At 6'2" 200 lbs, Blanding is already plenty big, and could play in college right away as a freshman. In fact, he might be ready to play in college now. In Jon Tenuta's aggresive blitzing schemes, a player like Blanding who can create turnovers could be a huge asset. 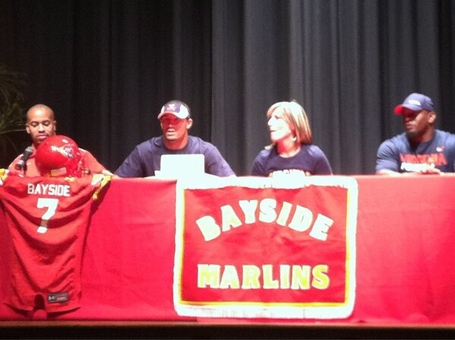 Obviously this commitment is an early one for the 2014 cycle. With almost a full year until Signing Day 2014, Blanding will be a Cavalier unofficially for a long while before signing the dotted line on his letter of intent. Virginia fans shouldn't worry too much about Quin having a change of heart either. There are two kinds of prospects that make early decisions: those who don't know what they want and make a rash decision, and those who know exactly what they want and have no reason to delay the inevitable. Blanding is very much in that latter category.

The Bayside star has made it clear that he wants to use his early commitment to UVa's advantage on the recruiting trail. The Commonwealth is loaded for the 2014 cycle, including several players that Blanding is close with. 5-star Andrew Brown and 4-stars Derrick Nnadi, Jamil Kamara and Jalyn Holmes all train or play 7 on 7 with the new Virginia commit. Blanding plans to use his influence with those close to him, and potentially sway them towards Virginia. Quin's commitment also sends a message to other top-rated players around the nation, that perhaps Virginia is a place they should look into. Obviously Blanding's early commitment is huge for the Hoos on the field down the line, but it could mean a lot to the Virginia program's 2014 recruiting class as well.